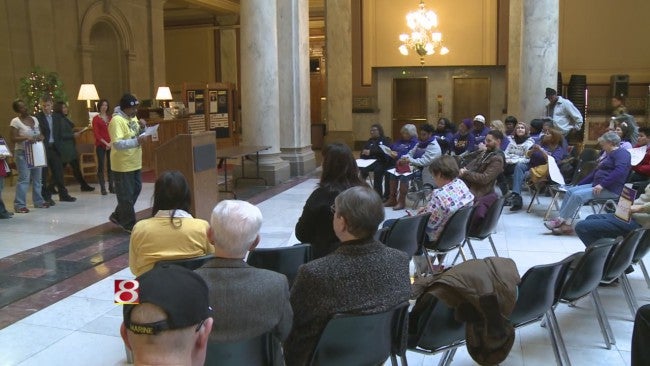 INDIANAPOLIS (WISH) – Wal-mart, the state’s largest private employer, announced last week a raise in their minimum wage for employees. Monday, demonstrators visited the Statehouse to tell lawmakers that they think it’s time they do the same for the rest of the state.

Lawmakers, activist groups, and working people are asking legislators to consider bills to raise the state minimum wage from $7.25 to $10.10 per hour. Two bills — one in the House and one in the Senate — have been introduced by Democratic lawmakers, but neither was given a hearing.

“Our legislators in the state house should hear what people throughout Indiana are saying,” said Tony Floro of the AFL-CIO.

The demonstrators marched to deliver a message to republican leaders who’ve opposed the measures, challenging them to live on minimum wage for a week.

But republicans say that increasing the minimum wage would have an adverse effect on the economy, costing new hires and existing jobs.

“A single mother who’s trying to raise children and trying to make a living is better off with a job than no job. And if you set an artificial minimum wage, some jobs are going away, it’s just that simple,” said Rep. Jerry Torr (R-Carmel).

But supporters of an increase deny that logic.

“That’s a lot of malarkey. You know, the minimum wage has existed in the United States since 1938, has been raised more than 25 times. It did not cause major job losses each time. Matter of fact, at every point, our nation ended up prospering even more,” said Flora.

Neither bill is likely to be reconsidered in their respective committees, but working mother Keila Stewart says she’s not done fighting yet.

“I’m just trying to make it, I feel like I’m going to keep on fighting for what I believe and we’ll get a raise eventually,” she said.

Twenty-nine other states have passed legislation to raise their minimum wages above the federal mandate, according to the National Conference of State Legislatures. Nine of those raised their wages just this year.