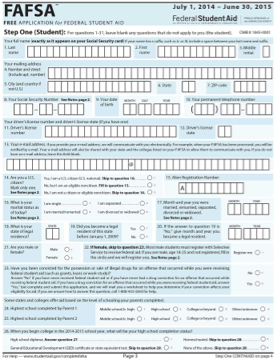 INDIANAPOLIS (WISH) – Indiana high school seniors and college students must file the FAFSA by the end of the day on Tuesday, March 10.

The 108-question form can be daunting for many. One recent study found about 2 million students who would qualify for federal Pell grants don’t even fill out the form.

If you plan to tackle it Tuesday, you’ll need basic information like your Social Security number and your driver’s license number, if you have one. You’ll also need your most recent federal tax returns. If you’re under 23 years old, you’ll also need your parents’ forms. If you or your parents haven’t filed your 2014 taxes yet, you can use last year’s information or estimate for now to get the form in and then you’ll have until May 15, 2015 to make adjustments.

If you’re overwhelmed, many colleges will help you fill out the form. Ivy Tech Community College has staff on hand until 6 p.m. Tuesday.

“At home, they’re afraid that they might put something wrong and mess up the whole process, so us being here with them, you see a difference. Students feel confident that we’re helping that they’re going to get the best that they can get from the FAFSA,” said Sean Tucker, Ivy Tech express enrollment student services professional.

The form needs to be in before midnight Tuesday. However, the filing center is in Kansas, so that means FAFSA application receipts are recorded in the Central time zone, giving Indiana students an extra hour.

Even if you completely miss the deadline, government officials say to file anyway. You should still be eligible for federal Stafford and parent loans and, depending on need, you may still receive a grant.

Meanwhile, President Barack Obama and some legislators are trying to trim down the form. Some want to shave the 108 questions down to just two, but financial aid experts say that just won’t work. The FAFSA form was created in 1992 to simplify and streamline the financial aid process, but it had to include many questions that various states and schools used to determine aid eligibility.

If Congress shortens it, there’s nothing stopping states and school from going back to the old days of requiring their own applications.

However, there could be a way for the FAFSA to be easier and keep most of the questions intact. The IRS could link a data-retrieval tool to the form. Students would just a press a button and the IRS fills out the form for them. There’s just one problem: the FAFSA is due before many students and their parents file their taxes for the previous year. For that reason, some education experts say use the tax information from two years prior. For instance, students could use 2013’s tax information on the 2015 form. The only problem with that is that the Department of Education says it would make students seem needier and would increase the amount of aid given.