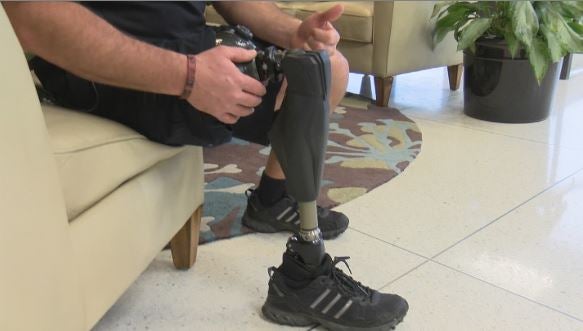 FISHERS, Ind. (WISH) — A Fishers firefighter is defying the odds and making history by returning to work full time and in full capacity after the amputation of his right leg.

Lt. Brandon Anderson has served on the Fishers Fire Department for 16 years but suddenly in August of 2016, a motorcycle crash sent him to the hospital.

“An individual cut over into me and ejected me from the motorcycle, damaging my right leg,” Anderson said. “When it first happened, it’s devastating, it took all of your life and your livelihood and what you knew at that point in time and just rips it away from you in an instant.”

Anderson says doctors informed him the only way to get a quality of life back was to amputate and go the route of the prosthetic. He then reached out to prosthetic experts to see if they could create a leg that could bring him back to the department as a fully functioning firefighter. He also reached out to other firefighting amputees to find out how they managed to do it and was surprised to hear that no one had heard of an above-the-knee amputee returning to their department as a fully qualified firefighter.

“It’s a very physically demanding job. We have to be able to meet those physical agility requirements on a yearly basis,” Anderson said. “Fortunately, that’s my personality, to just adapt and overcome and to never give up.”

With the support of his wife, department and a skilled prosthetic team, Anderson obtained a prosthetic and began training. By June of 2017, just 10 months after his accident, Anderson had passed all the physical requirements and agility tests to return to his previous position in the department.

“Full capacity, in the same operation level I was at before the accident, with no modification other than I now have a prosthetic instead of my own leg to get into my gear,” he said.

Anderson explained that despite one of his legs being made of metal and plastic, he doesn’t face any special danger when fighting a fire. He said the same protective pant legs cover his prosthetic leg and his real leg.

“If this piece of metal is so hot that it’s being damaged, then I have bigger problems because the rest of my skin is under the same protective gear,” he said. “So if I’m in that situation, I’m going to know it before the leg knows it.”

Anderson also has a spare prosthetic leg already laced into his fire boots so that when he’s rushing to the engine, he need only remove his tennis-shoe wearing prosthetic leg and snap into the fire-boot leg at the knee.

“People were very touched by his story, his determination,” said Cecilia Coble, councilwoman on the Fishers City Council.

Thursday morning, Anderson presented his story in downtown Fishers to help the city kick off Disability Awareness Month, and the #ShareYourStory movement.

“I hope that other employers and businesses will look at his story and kind of think about ways in which they can make a diverse workforce,” said Coble, “and look to employing people with both intellectual and physical disabilities.”

While Anderson may be the first to achieve his goal, he hopes he won’t be the last.

“Think outside the box a little, give people a shot, and they will probably surprise you as to what they’re capable of doing,” he said.

The city of Fishers will continue to host Disability Awareness Month events, including a comedy show, adaptive sports presentation and a photography show. View their calendar here.