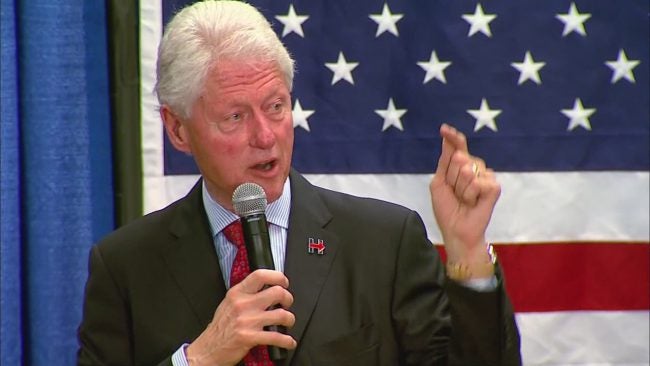 INDIANAPOLIS (WISH) — Former President Bill Clinton calls Indiana a “poster child for all the promise of America,” as the spotlight continues to shine on the state ahead of the primary election. Clinton made a stop in Indianapolis on Tuesday, campaigning for his wife, Democratic front runner Hillary Clinton.

He focused on a number of issues, including the economy, education and healthcare. There was some mention of Hillary’s opponent, Bernie Sanders, but Bill Clinton’s bigger concern seemed to be Donald Trump.

Well before he was set to take the stage, Clinton supporters were there. Almost 500 people lined the sidewalk. Once inside, they filled Secretary Clinton’s North Keystone Avenue campaign office to the brim.

“I just felt like, Hillary Clinton, if I could vote, would be the best turnout for all of, like America in general,” said Sarah Dabney who is too young to vote.

Debra Cooper is an Indianapolis resident and also came out to show her support.

“The candidates we have now, none of them have that much experience. But, I think she’s true to what she believes in,” Cooper said.

Clinton tailored his speech to Indiana, specifically discussing Carrier, the Indianapolis plant that announced plans to move to Mexico.

“The Carrier situation made me want to cry because they said, ‘Well, yea. We’re making a ton of money,’ but their shareholders want more and the poor president didn’t get his bonus,” Bill Clinton said.

He also says the problem with Carrier isn’t labor cost, but greedy shareholders. He says Hillary would give tax credits to companies like Carrier, that fairly share profits with employees.

He also touched on the drug problem.

“We are dealing with a horrible drug epidemic in this country of heroin and prescription drugs. It is feeding gang violence in places like Indianapolis,” he said.

Finally, he mocked Trump’s plans to build a wall to block illegal immigrants from entering the US.

“That’s why Hillary has been the most outspoken saying it’s crazy for us to think we can build a wall when the battle we’re fighting is inside the minds and hearts of people,” the former president said.

There were a couple protesters; one claiming the Clintons are criminals and the other in support of Sanders. Bill Clinton wrapped up his visit in Indiana with one last stop in Evansville. He is expected in Pennsylvania later in the evening for that state’s primary night.