Former President Carter gets a smooch on ‘Kiss Cam’ 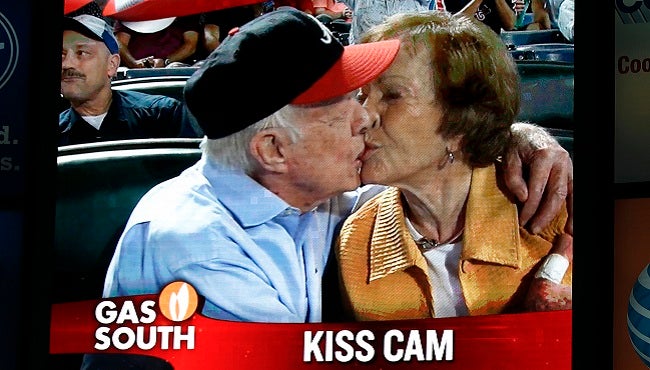 ATLANTA (AP) – Former President Jimmy Carter kisses his wife,Rosalynn, on the “Kiss Cam” during a baseball game between the Atlanta Braves and the Toronto Blue Jays in Atlanta.

Carter announced in August that liver surgery found cancer that has spread to other parts of his body. Carter said it’s still not clear exactly where the cancer originated.

Carter was the nation’s 39th president, advancing as a virtual unknown on the national stage to defeat President Gerald Ford in 1976. But several foreign policy crises, in particular the Iran hostage crisis, crushed his bid for re-election and Ronald Reagan swept into the White House.

The native of tiny Plains, Georgia, rebuilt his career as a humanitarian guiding the center focused on global issues, including health care and democracy. Carter earned a Nobel Peace Prize in 2002, helped defuse nuclear tensions in the Koreas and helped avert a U.S. invasion of Haiti.