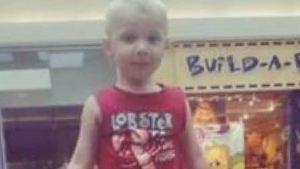 BLUFFTON, Ind. (AP) – A funeral has been held for a 3-year-old northeastern Indiana boy more than five weeks after he died while his mother and two other people allegedly smoked methamphetamine.

Owen Collins was remembered as a rambunctious child during the service Tuesday at a funeral home in his hometown of Bluffton.

The cause of the boy’s death is still pending. WPTA-TV reports Owen’s body was released to his father, Tyler Collins.

The boy’s burned body was found in a rural area Jan. 18 after he was reported missing.

Owen’s mother, 21-year-old Breanna Arnold, and 30-year-old boyfriend, Zachary Barnes, are charged with neglect of a dependent resulting in death, abuse of a corpse, dealing methamphetamine and other counts. They’re being held on $350,000 bonds. A teenager also is charged in the case.