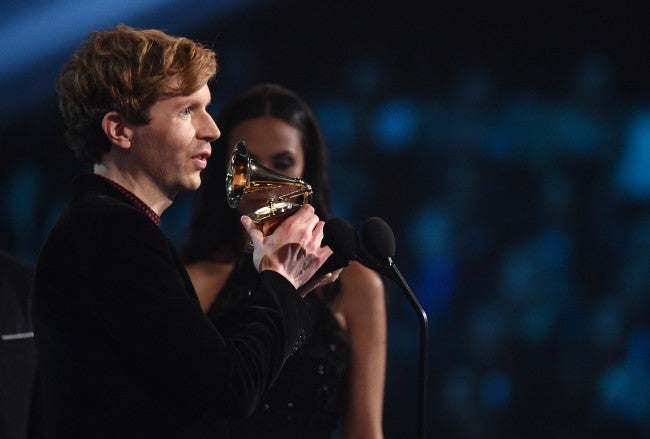 LOS ANGELES, Calif. (MEDIA GENERAL) – The 2015 Grammy Awards closed in on four hours before it was all said and done. Many of the performances were emotional, slow, and strong. Reaction to the show was all over the place. Some music fans called it boring, others loved the unique performances.

Paul McCartney, Rihanna, and Kanye West sang one of the most anticipated songs. Beck surprised on Sunday night. Pharrell made us laugh, and one new artist had a “really, really good night.” We’ve compiled the most-buzzed about moments from the more than three-and-a-half hours of Grammy programming to give you a simple breakdown of music’s biggest night.Sam Smith Wins Again

“I’m having a really, really good night,” Sam Smith told the Grammy audience. It wasn’t a huge surprise. Crooner, Sam Smith, came away from Grammy night as a big winner. His album “In the Lonely Hour” won for Best Pop Vocal Album. Smith also won for Best New Artist, Song of the Year and Record of the Year for “Stay with Me.”

Smith said before this album he tried everything to get his music noticed including losing weight. “It was only when I started to be myself that the music started to flow,” Smith said in his acceptance speech. Later in the night, Smith thanked the man who broke his heart for helping him write the music that won four Grammys.Beck Wins, Kanye Sits Back Down

Beck won the Grammy for Album of the Year for “Morning Phase” beating out Beyonce, Ed Sheeran and Sam Smith. Online music fans were confused. In fact, at one point, “who is Beck” was a trending topic on Twitter. Beck is an American singer-songwriter described as creating a collage of musical styles.

Kanye West made noise when he almost interrupted Beck’s acceptance speech like he did to Taylor Swift back in 2009. At the time, he got lambasted by music fans for his rudeness. This time he sat back down and played nice. And, fans on Twitter applauded his ability to laugh at himself. However, after the show, West told the media he really did think Beyonce should have won the award and Beck should have given his award to her.

Paul McCartney, 72, Madonna, 56, Annie Lennox, 60, and AC/DC all blew away the audience of the 2015 Grammy Awards proving age is but a number. The musicians dwarfed singers half their age. Madonna held the stage solo. AC/DC opened the entire show. Paul McCartney played with Rihanna and Kanye West in what many would say was the most anticipated performance of the night, “Four Five Seconds.” Annie Lennox teamed with Hozier to bring even more power to the hit “Take Me to Church.”Rihanna, Kanye West and Paul McCartney Perform Together

The unusual pairing took the stage without an introduction and sang their newest single “Four Five Seconds” against a simple black background. Overall, fans online seemed to enjoy the new song. Kanye West sang instead of rapped. Rihanna had a soulful sound to her voice. And, legend, Sir Paul McCartney, played guitar along with the two mega-stars of today. All of the musicians wore simple black to highlight the music. We didn’t hear much from Paul McCartney even though we saw his mouth move. So, there was concern his microphone wasn’t on. It’s unclear what happened there.

It’s past my bedtime but I’m glad I stayed up for the @rihanna, @kanyewest and @PaulMcCartney performance. Great Yall!! #Grammys

Sir Paul, Down in Front

Paul McCartney was caught in an awkward moment while dancing to ELO. He was the only one standing when the camera swung his way. He was dancing and singing along until he realized he was on live. He quickly sat down, perhaps thinking he was in the way.

Pharrell made waves with his extra large brown hat last year at the Grammys. This year, he took to the stage to sing his Grammy-winning song “Happy” wearing what looked like a bellhop outfit and bedazzled shoes. The reaction online was confusion, laughter, but also a lack of shock, since it seems to be Pharrell’s goal to wear the unusual. Even, Pharrell got in on the action Tweeting about his look.

Who wore it best? #GRAMMYspic.twitter.com/GA50jo0ahp