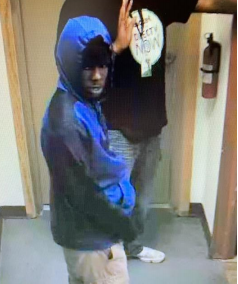 According to Crime Stoppers, on April 14 at approximately 1: 45 p.m., two black males entered the Cricket Wireless in the 200 block of North State Road 135.

Police say the two suspects, one of whom was armed with a semi-automatic handgun, took about 20 cell phones and cash and then fled the store, leaving in a small blue-colored SUV-type vehicle.

The suspects are said to be in their late teens or early 20s.