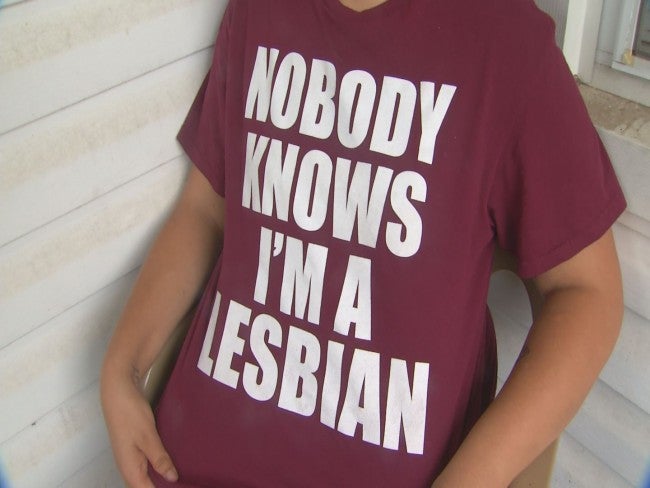 Those are the words on a Chesnee High School student’s shirt that she said got her suspended from school.

“You need to change your shirt or go home,” Briana Popour said she was told by school administration.

That was the option Popour said she was given last week when the openly gay high school senior wore the boldly printed t-shirt to class.

“I’ve worn this shirt before and nobody’s ever said anything,” said Popour.

Until now, that is. Popour said she was pulled out of class into the front office and told her shirt was disruptive.

She said that’s news to her and there’s nothing against displaying sexual orientation in the dress code handbook.

“When I said something to him about the handbook, he said “Well, not everything is in the handbook,” said Popour.

When contacted the school district sent an email saying the shirt was “offensive and distracting” with links to the dress code policy. The email also stated that, “Clothing deemed distracting, revealing, overly suggestive or otherwise disruptive will not be permitted.”

Briana’s mother, Barbara Popour, wants to know why her daughter’s shirt is considered offensive and who makes that call. That’s what she said she asked that administrator when she went to pick up her daughter last week.

“He does not like people in his school wearing anything that says anything about lesbians, gays or bisexuals,” said Barbara.

She felt it wasn’t a good enough answer.

“There’s other stuff that supposedly could be against religion, against anything else, but that wasn’t listed in his comment,” she said.

For Briana, it’s more than a shirt. She said it’s an identity; one of which she said that she and other gay teens shouldn’t be afraid.

“Isn’t that what school is supposed to teach you? To be happy with who you are? Maybe people will be more comfortable showing who they are because you should be able to wear what you want to wear,” said Briana.