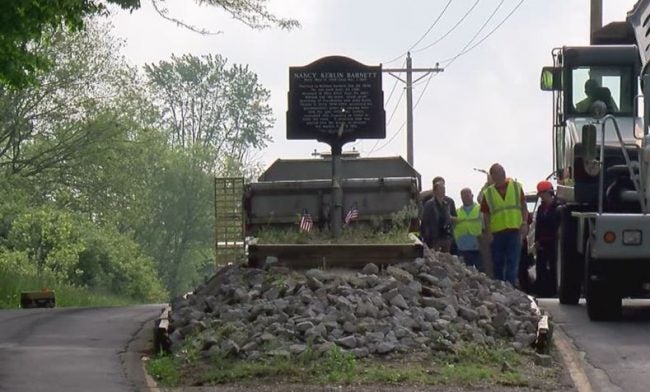 AMITY, Ind (WISH) — Authorities in Johnson County are digging up the remains of a woman buried in 1831. We first told you about the historic grave last week.

The narrow road was built around Nancy Kerlin Barnett’s grave decades after she was buried. But that layout, officials say, is a safety hazard. Archaeologists with the University of Indianapolis will take temporary possession of the remains as the Johnson County Highway Department works to slim down the grave site and widen the road.

At first glance, it looks like a typical road project. But after a closer look, you’ll see it’s not. That’s because we’re talking about a road, with a grave smack dab in the middle.

“It’s elevated above the road, so it’s unsafe for vehicles and it’s actually not protecting the grave very well the way it is now,” said University of Indianapolis Professor of Anthropology Dr. Chris Schmidt.

Crews are removing the remains long enough to widen the road. As road work is completed, Schmidt will conduct a cursory skeletal analysis. He’ll look for signs of diseases as well as age, sex and ancestry.

“We really want to see just what life for this individual. Muscle attachments can tell us about what kind of work they did. And their teeth can tell us about what they ate, and really ground truthing some of the stories that we’ve heard about people who lived 200 years ago, I think [this] is very cool,” he said.

Barnett was buried in 185 years ago. She was 38 years old at the time of her death.

“She did have 11 children. She was married at 15, started having children fairly young. She had her last child in July and passed away in December,” said Johnson County Museum Director David Pfieffer.

Barnett likely died of disease, according to Pfieffer. Officials initially wanted to determine an exact cause of death, but Barnett’s family has requested it not be done.

A plaque, which has also been temporarily removed from her grave site, claims Barnett’s husband was the great, great, great grandson of Pocahontas.

“Pocahontas was one of our great, great, great grandmothers,” Lee Collett said. He showed up to take some pictures of the operation Wednesday. “We’re related. Twelve generations down or something,” he said of his connection to Barnett.

Some family members were not behind the project. “Well I wouldn’t do it, but I would’ve moved these power poles wider and made the road wider around it and left it where it was at,” Collett said.

The road work is expected to be completed by May 18. Once done, the remains will be buried again.

Officials are hoping to put Barnett in a new casket, but they are relying on donations. They also would like to replace her fading headstone. The old headstone would be preserved at the Johnson County Museum.