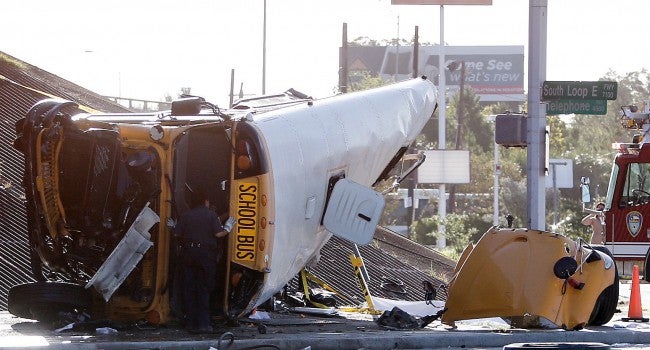 HOUSTON (AP) – A school bus plunged off a highway overpass in Houston after being hit by a car on Tuesday, killing two students and seriously injuring three other people, police and school officials said.

A female student died at the scene, while a second girl died at a hospital, according to the Houston Independent School District. The driver and the only other passengers on the bus – two male students – are hospitalized.

Their names and ages haven’t been released. The students were being transported to Furr High School, which also operates a charter school; the girls who died each attended one of those schools.

“We are deeply saddened by this tragedy,” Superintendent Terry Grier said in a statement. “I ask all of the HISD community to join me in praying for all of those involved.”

Police spokesman Victor Senties said investigators believe that a car struck the front driver’s side of the bus after swerving to avoid another vehicle during morning rush-hour traffic. The bus lurched to the right, struck a guardrail and toppled to the road below, Senties said.

Photos and video of the accident show debris scattered around the yellow bus, its front end heavily damaged and its roof caved in.

Investigators are trying to determine if cameras along the highway or nearby could reveal how the accident happened, Senties said. Footage from the bus’ seven security cameras also is being reviewed.

School officials said the bus driver has been with the district for about three years and has a clean driving record. Records show that the bus last underwent a maintenance inspection in June. The bus was purchased new in 2008, and was equipped with lap belts.

“The State of Texas mourns the loss of Texas students today in a tragedy no parent should ever have to experience,” Gov. Greg Abbott said in a statement.

Houston operates the largest public school district in Texas with about 215,000 students. The district has about 950 buses on the road each day, transporting 34,000 students.