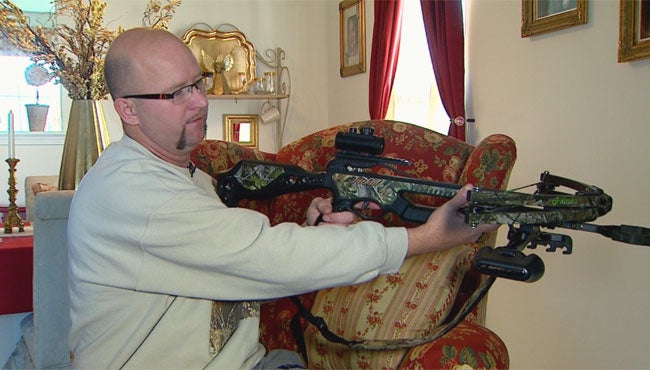 As the number of injury lawsuits against the crossbow maker, Barnett Outdoors LLC, starts to mount, I-Team 8 has learned a federal consumer investigation is also underway against Barnett, the Florida-based company that claims to have sold more than a million crossbows.

The Consumer Product Safety Commission’s investigation was prompted last month by the complaints of injuries from several people across the country – including an Indiana man.

The concern: That thumbs were lacerated or severed by the absence of a safety mechanism known as finger guards, which are meant to keep shooters’ hands away from the crossbow’s drawstring.

“I could see the bone on top of the finger leaning over. And I just went into shock.”

David Harville says he was deer hunting with a Barnett Jackal crossbow in September near his Anderson, Indiana home when his right thumb was severed by the crossbow’s drawstring. Doctors were able to re-attach the thumb, but the experience has left him in pain and facing more than $4,000 in medical bills.

“I knew that it was really damaged. I could see the bone on top of the finger leaning over. And I just went into shock,” Harville said. “(Barnett) needs to be accountable. They really do.”

Harville is now one of a growing number of consumers who have sued or filed complaints against Barnett Outdoors LLC, which makes the Jackal and other crossbows in question.

“It’s depressing. It really is messing with my day-to-day activities,” Harville said, noting that he has trouble buttoning his shirt and no longer hunts because of the pain.

David Barnett, the company’s vice president of product design, did not return a phone call seeking comment. His attorney, Christopher T. Sheean, told I-Team 8 by email: “Barnett stands behind its products, but given that lawsuits are pending involving these issues, Barnett will not comment and will allow the courts to determine the issue.”

But during a recent video deposition provided to I-Team 8 by Harville’s attorney, David Barnett did speak and defended his family’s company, saying the issue isn’t with his products, but with careless hunters.

While other crossbow manufacturers started using finger guards years ago, Barnett waited until 2013 to add them to its Jackal model, David Barnett testified. While most Barnett crossbow models now use finger guards, I-Team 8 discovered there are still Buck Commander and Jackal models being advertised without them on Barnett’s website and through online retailers like Amazon, Fingerhut and Gander Mountain.

Representatives with those retailers did not return I-Team 8’s phone calls or emails.

“CPSC has jurisdiction over these products and has an active compliance investigation regarding the safety of crossbows.”

No recalls have been issued, but officials with the Consumer Product Safety Commission confirmed it has an “ongoing compliance investigation” against Barnett.

“The incidents suggest serious injuries. CPSC has jurisdiction over these products and has an active compliance investigation regarding the safety of crossbows manufactured by Barnett Outdoors, LLC of Tarpon Springs, Fla.,” CPSC spokesman Alex Filip wrote in an email.

In response to that, Barnett issued a statement that read:“Barnett Outdoors LLC prides itself on making high quality crossbows and is cooperating with the CPSC’s ongoing investigation.  Barnett’s crossbows are for hunting and target practice, and can be used safely when handled properly.  Barnett’s crossbows are accompanied by an owner’s manual and extensive, common sense warnings. In addition, Barnett’s crossbows include warnings on hangtags and stickers on the products regarding safe use and handling.  Barnett designs and manufactures its crossbows with safety and performance in mind.  As it has done for years, Barnett will continue to provide safe products to its customers and will continue to instruct users on the safe use and handling of its crossbows.”

Filip said the Consumer Product Safety Commission’s investigation has no timetable for completion. The CSPC’s website has received at least six complaints related to Barnett crossbows causing thumb injuries. Many consumers have complained their thumbs have been shattered or severed while using a Barnett crossbow.

One complainant wrote, “it was so painful, I vomited…” Another wrote that doctors were unable to re-attach his thumb.

At least a half dozen lawsuits have been filed with more pending against Barnett.

According to records from the court clerk’s website in Pinellas County, Florida, 11 product liability lawsuits have been filed against Barnett dating back to 2013. Additional lawsuits are pending, according to Brad Kizzia, a Dallas-based attorney representing Harville and several other clients.

“Barnett has known about this problem for some time,” said Kizzia.

I-Team 8 also found additional lawsuits against Barnett dating back to 2009 from Indiana, Kentucky and Texas.