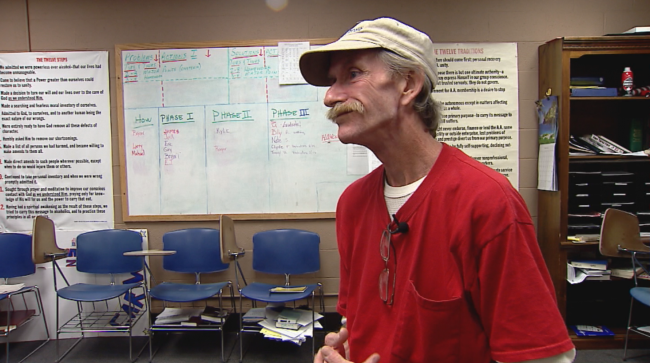 “I didn’t have nowhere to go,” said Staples. “So I lived on the streets and dug in the dumpsters and all that for about five years.”

Stan’s story is not that unusual.

“When I was drinking and drugging, I lived one day at a time and didn’t have nothing,” said Staples.

The Army veteran used to be homeless. He didn’t have any teeth, and until five months ago, he hadn’t worked in 14 years.

“My life was always unmanageable, you know,” said Staples. “I would always wake up in jail and stuff like that and swear to myself. I wouldn’t do that again, and that same day when I’d get out, I’d be right back in it again, the same old, same old.”

But, with help from Hoosier Veterans Assistance Foundation or HVAF, a United Way Agency, he completed a 12-step program and quit drugs and alcohol. It took him eight and a half months, but he is now back on the right track. He’s been sober now for 14 months.

“What really gave me no desire to drink or anything anymore is my higher power,” said Staples. “My God, you know, he’s got my back all the time.”

Debra Des Vignes works with veterans every day and says Stan is just one example of the work HVAF does.

“He’s moved on to another one of our properties for supportive housing,” said Des Vignes. “And he has a job, so he’s making progress and he’s part of our success story, and United Way’s success story, so we’re really excited for him and all our veterans.”

Also making Stan feel better – a new set of dentures he got from the IUPUI school of dentistry. Stan didn’t have teeth for eight year. Because of a United Way partnership, his dental work was completely free. You might even catch him smiling.

“They did a real good job,” smiles Stan.

Join us as we help those in need stop needing help. Go to UWCI.org/give.