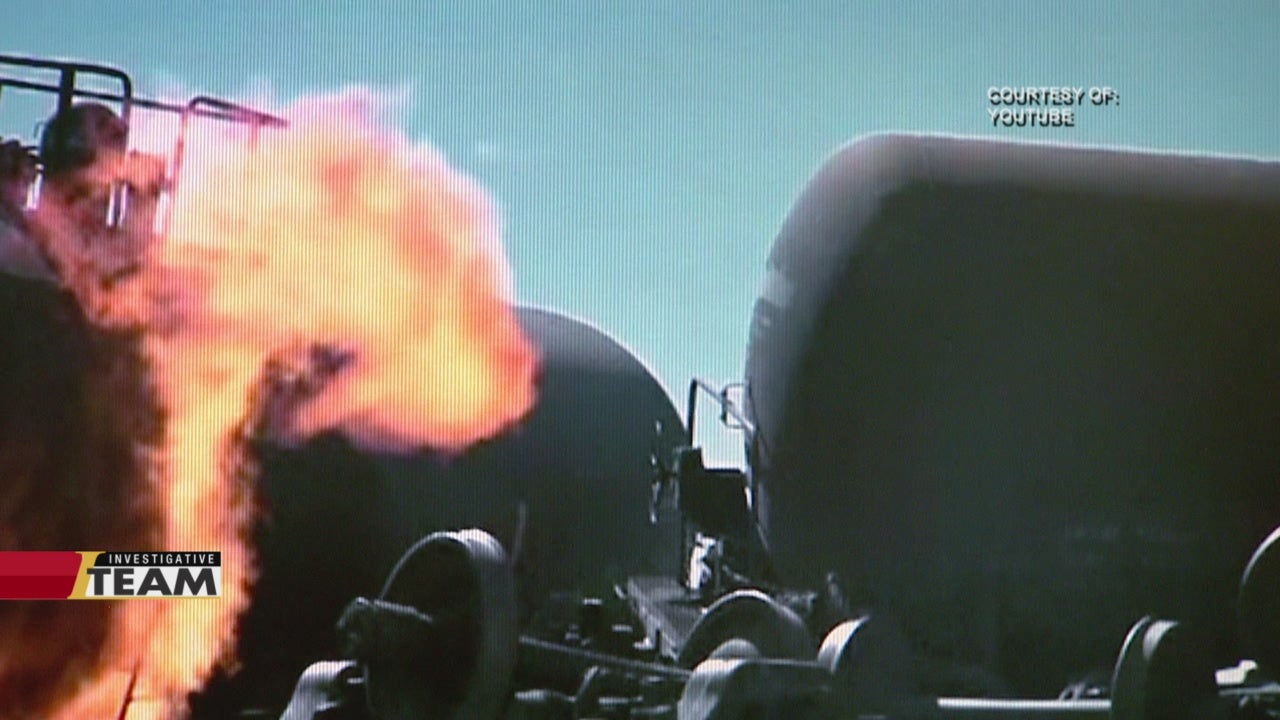 INDIANAPOLIS (WISH) – It’s the hottest substance Captain Fred Schwomeyer says he’s ever been around in all his years as an Indianapolis firefighter.

He’s referring to the heat from a Bakken crude oil fire, which is earning national attention this week following a fiery train derailment in West Virginia.

The CSX train, carrying more than 100 tank cars of crude oil from the Bakken shale region of North Dakota, derailed Monday, displacing hundreds of people and raising new concerns about the tank cars used to ship the oil.

Last fall, Schwomeyer, the hazardous materials coordinator for the Indianapolis Fire Department, was part of a group of firefighters who took part in a CSX training exercise in Colorado. Invited by CSX officials to attend, Schwomeyer said he gained first-hand knowledge of the oil’s volatility by taking part in a simulated derailment where Bakken crude oil was heated up until it ignited.

“It spit, it’s boiling, it kicks out things. The heat is just – because the are so many different chemicals in that oil – the heat is just intense,” he said. “It’s the hottest thing I’ve been around, outside of being in a fire,” he said.

The difficulty, Schwomeyer says, is that the oil – which is often captured through a drilling process known as “fracking” – can be unpredictable because of its low flash point and varied weight. The recent oil boom in North Dakota has prompted shipments of Bakken crude oil to rise dramatically – from 9,500 carloads in 2008 to more than 400,000 in 2013.

“It can be tar-like and dark as night or as light as Mountain Dew,” said Schwomeyer.

The derailment in West Virginia, which shot fire balls into the sky, burned a home and caused oil to leak into a tributary of the Kanawha River, has left many questioning the safety of transporting the substance. Schwomeyer says he believes Indiana emergency officials and others are prepared to handle a similar situation. He said it’s also not surprising the firefighters in West Virginia were taking their time and allowing the remaining oil to burn itself out.

“The idea is keeping everything cool. Trying to keep it from involving any other tank cars. Once it gets to that point to where it’s cool enough that you can start dealing with it, then you can start putting it out,” he said.

Oil train may have passed through Indiana before derailment

Michael Newtown, the emergency management official in Noble County, told I-Team 8 Wednesday that it is possible the train that derailed in West Virginia passed through northern Indiana on its way east.

“It’s certainly could have based on what I know,” Newtown said.

Although he said he could not be “100 percent” certain, it is quite possible based on the known routes used by CSX to transport the oil, an I-Team 8 analysis found.

CSX officials would not confirm Wednesday whether the train involved in West Virginia derailment, did in fact, pass through Indiana.

“CSX has an extensive history of sharing information about the transportation of hazardous materials, including crude oil, with the communities in which we operate. Information about the shipment of hazardous materials is security sensitive, and we believe that information is most useful in the hands of first responders and emergency planning agencies that are responsible for protecting the public’s safety. We are not able to disclose details about routing beyond those we have shared with the states in which we have primary oil train routes. Those routes are determined consistent with federal risk factors, and those routes receive additional track inspections among other safety enhancements,” said CSX spokesman Gary Cease in an emailed response to I-Team 8’s questions.

I-Team 8 broke the story last fall of the shipping routes and how local county officials weren’t being notified of Bakken oil shipments, despite a federal order that said they should have been. The Indiana Department of Homeland Security later acknowledged that there was “a delay” in notifying county officials.

Our report also chronicled how tens of millions of gallons of Bakken crude oil are shipped through 12 Indiana counties up to 20 times per week.

Indiana’s northern rail corridor is one of the busiest in the country.

This week’s derailment in West Virginia marked the third time that newly designed tanker cars have been involved in a derailment or spill involving Bakken crude oil, according to the Associated Press.

I-Team 8’s previous reports on the newer tank cars, known as CDC – 1232s, show that they have been upgraded with protective barriers, reinforced hatches and sometimes thicker, jacketed steel exteriors. The idea behind this was to make them less prone to puncture. But with this latest derailment, it has raised concerns about whether the newer tank cars can withstand a derailment.

The U.S. Department of Transportation recently submitted a final draft of newly proposed safety changes that call for slower train speeds, thicker tank car shells and upgraded braking systems. Those proposed changes are still being reviewed by the White House’s Office of Management and Budget, a spokesman told I-Team 8.