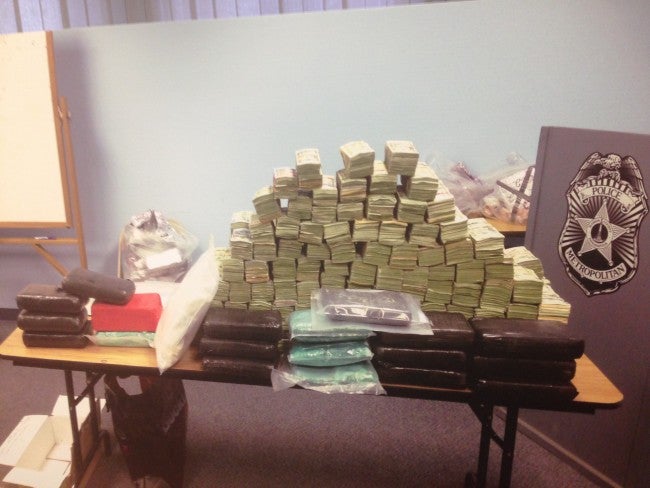 During the press conference they announced the arrest of four individuals for their role in a drug trafficking operation. According to police, the operation stretched from Arizona to Indianapolis.

Federal agents along with detectives from IMPD served search warrants at three locations on the west side on Wednesday morning. Police located heroin, cocaine and cash in large quantities.

All four were charged with conspiracy to distribute heroin and cocaine.

The initial investigation started in late 2013.

According to police, in January 2014 an investigation led to the arrest of 13 people. Police say they seized around eight kilograms of cocaine, 12 fire arms and $200,000 in the Butler-Tarkington area. Following the arrests police learned that Colon was a major target.

In May information about large amounts of narcotics were being shipped to Indianapolis from Phoenix, Arizona, police confirmed. Police were able to arrest several people with large quantities of heroin and cocaine.

On May 15, one kilogram of heroin, two firearms and over $1.8 million was recovered in Greenwood with connections back to Colon. On May 29, IMPD obtained information about the same group helping them confiscated around 40 pounds of meth and firearms.

Police say on January 20 they arrested Daniel Stewart, who is an associated of Colon, for possession of heroin, cocaine stolen guns and meth.

Police set up surveillance on Colon.

Police say in all 20 federal and 45 state defendants have been charged. More than 10 kilograms of heroin, 25 killograms of cocaine, 42 pounds of meth, 25 guns and $4.5 million in cash was confiscated.

Police Chief Rick Hite adds the dealers arrested in this case are not street level dealers. Instead they are considered some of the higher ups in this crime ring.