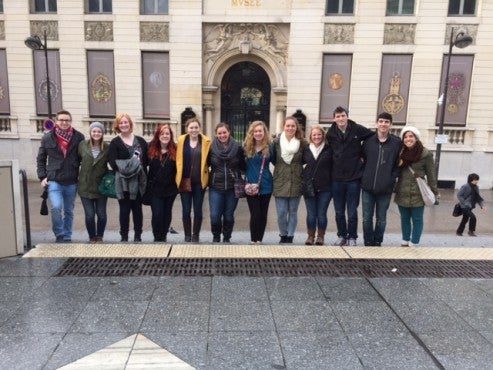 FORT WAYNE, Ind. (WANE) – They’re staying only a mile away from the Paris newspaper building, where terrorists killed 12 people Wednesday. But a dozen Huntington University students say their experience has shown no signs of danger.

As French police freed hostages and took down gunmen in and near Paris Friday, the students were spending their first full day in France’s capital. Caitlin Trainer is a senior at HU and a team leader for the group, which is on a Christian mission trip helping others and sharing their faith.

“We are totally fine. We’re not being affected by the attack whatsoever,” Trainer told WISH-TV’s sister station WANE News via FaceTime.

The students are staying in the center of Paris, five and a half miles west of Friday’s grocery store standoff and about a mile away from Wednesday’s massacre at the satirical magazine.

They were supposed to land just before the first shootings took place. But their flight was delayed 24 hours, partly because of weather.

“If we had flown in when we were supposed to, we would have gotten in at 7:30 on January 7, which would have put us there around two and a half or maybe three hours before the shooting took place,” Trainer said. “We just weren’t sure what we would have been doing at that time, but it’s cool to think we were saved from anything that could have happened.”

The group of students went on a prayer walk around the city Friday, keeping in mind the victims of the recent attacks. They, understandably, steered clear of the hostage areas.

“Really the only big thing that we noticed is different is that we just see more armed policeman with guns which is actually kind of normal for Paris,” said Trainer, who is on her fourth trip to the French capital. “A lot of times they do walk around fully armed with big guns. This time around there’s just more of them. So you’ll see groups of like 10 instead of just two walking around the city.”

The students have teamed up with the Envision Paris organization. During their trip, they’ll host a ministry for those trying to learn English, feed the homeless, and host an art exposition. They plan to officially begin their ministry Saturday.