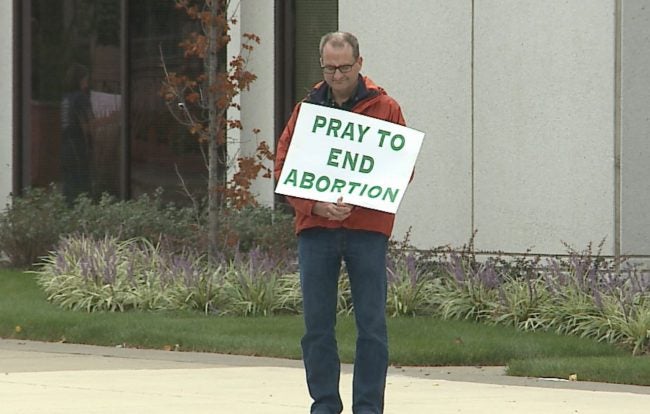 INDIANAPOLIS (WISH ) – If you were driving down Meridian Street Sunday afternoon, you may have seen a large group of protesters.

It was part of an international peaceful protest against abortion.

According to the most recent data available from the CDC, there were about 700,000 legal abortions performed in the United States in 2012.

The number appears to falling each year. But the protesters said more needs to be done

“We want to remind people that human life is a gift from God and we’re so grateful for how much he loves us,” said Julie Oelker, one of the hundreds of protesters.

They were holding signs and stretched from North Street to 38th Street.

“We’re a peaceful movement. We want to help mothers and their children,” Oelker.

“We believe that all life is precious from conception until natural death,” said Mary Kramer, who helped organize the protest.

The protest was organized by National Life Chain. People from hundreds of cities across the country and Canada took part.

42 cities across Indiana also joined in the peaceful protest.

“The slogan is one hour, once a year. It is a peaceful prayer vigil to end abortion,” said Kramer.

It was the 29th year for the protest. Some clinched rosaries, others embraced their babies.

“We want to speak for people who can’t speak for themselves for unborn children and for their mothers,” said Oelker.

“To help all those people it’s very empowering and it feels great because you know you’re helping people out there,” said Clare Oelker, Julie Oelker’s 12-year-old daughter.

The protests were held in every state, many of them with more than one location.