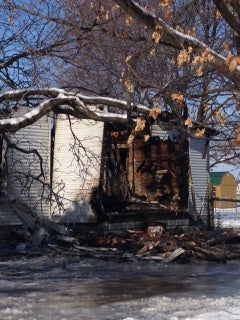 DELAWARE COUNTY, Ind. (WISH) – One man died after an early morning fire in Selma on Monday.

This marks the third fatal house fire in Delaware County in 2015.

Firefighters from the Liberty Township Volunteer Fire Department arrived to a home on East Jackson Street around 8 a.m. Monday. The neighbor dialed 911 after seeing smoke and flames coming from Charles Clairday’s home.

Neighbors were quick to tell emergency responders that the 83-year-old homeowner and his four pets were probably trapped inside.

“Within minutes I heard a loud bang,” Cook said. “I stepped outside and realized it was the roof caving in. My heart started racing and then said out loud, ‘Oh no, not my neighbor.’ I was hoping he would have made it outside but he didn’t. Yes, it’s heartbreaking. He would wave from his back porch and was so nice. We will miss him a lot.”

Investigators say they do not believe foul play was involved.

“It will take some time to do a thorough investigation,” the Liberty Township Volunteer Fire Department chief said. “We don’t know what the exact cause is yet. It was really cold outside this morning – electrical wiring issues was one of the first things that came to mind.”