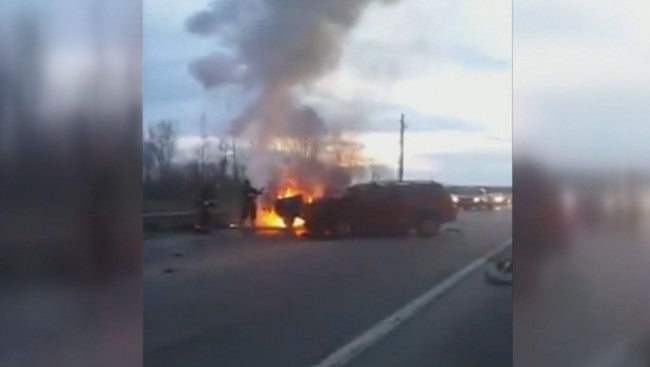 Karen Phillips was on her way to work at the time and saw it happen.

“They hit full force,” said Phillips, who stopped to help along with several other motorists.

“We were trying to pull him out,” said Phillips. “Wouldn’t happen. So I ran around the other side and was trying his passenger door. And when I did, the whole thing, the whole cab was black with smoke and I could see fire.”

Eventually, Phillips said she noticed a sledge hammer in the bed of the truck and moments later, they were able to drag the driver out of the cab.

“We pulled so hard we ripped his jeans apart trying to pull him out,” she said.

Phillips is a respiratory therapist and said she immediately checked to make sure he was breathing and had a pulse.

Police identified the truck’s driver as Daltyn Butts, 20, of Bargersville.

The driver of the SUV was identified as Katie Lynn Russell, 28, of Mooresville. She was in surgery Wednesday night at IU Health Methodist Hospital.