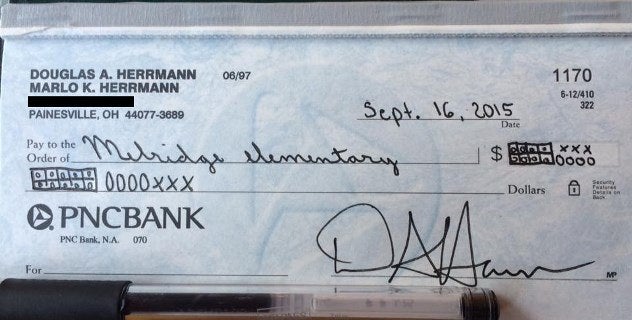 PORTLAND, Ore. (KOIN) – You’ve heard of Common Core. There are 2 camps: those who embrace it and those who hate it so much they want to see it gone.

The check, seen here, was posted on his Facebook page and at this writing has been shared more than 27,000 times.

But Hemant Mehta, who said he “spent seven years teaching high school math … (and is) a National Board Certified Teacher,” dismantled the Ohio dad’s check and took a swipe at those who don’t like the new method of teaching.“…Instead of trying to figure out what his child was learning, Herrmann did what so many parents do these days: He complained about something he doesn’t understand,” Mehta wrote.“I’ll be honest with you: I didn’t know what “ten-frame” cards were and I wasn’t sure what he was trying to write in his check. Then I spent a couple of minutes doing the research he couldn’t be bothered to do himself.”

Mehta then used visual graphics to explain what the “ten-frame” cards are Hermann incorrectly showed.

He then added, “’Common Core,’” by the way, doesn’t even say you have to use ten-frames. For second graders, it says students should learn the base-ten system. There are all sorts of ways to teach that, whether it’s ten-frames or old-school addition. All are acceptable. And the more ways you learn how to solve a simple problem, the more tools you have available to you when the problems get more challenging.”Mehta ended his rebuttal with: “I’m not a shill for Common Core. I’m just someone who understands what it is, unlike Doug Herrmann, who couldn’t explain it to you if he tried.”