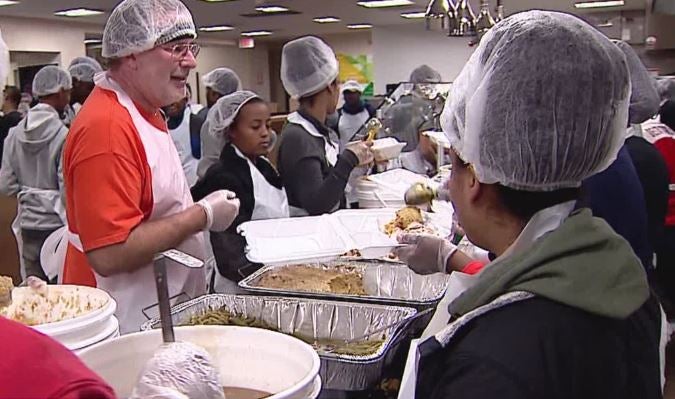 INDIANAPOLIS (WISH) — It appeared to be a traffic jam outside Butler University Thursday morning. But there was no traffic. People inside each vehicle were ready to serve.

The annual Mozel Sanders Foundation dinner kicked off Thursday morning. Some volunteers started preparing as early as 3 a.m. The group set a goal of feeding up 40,000 people. Several volunteers packed meals into vehicles, others scooped food into to-go containers. The bulk of the dinners were taken to churches, community centers or assisted living facilities.

“I believe no one should be hungry — ever,” said volunteer Kimberly Bradford.

It takes money to feed the hungry of Indianapolis, and the group has been raising funds for months. Each Thanksgiving meal costs the foundation about $4.50.

24-Hour News 8 watched as the young and old found ways to give back. Kevin Smith brought his sons so they could understand the importance of service.

“It makes me feel great to show them and teach my children the way a giving heart should be,” he said.

Mayor Joe Hogsett and Congressman Andre Carson worked the serving line, placing side dishes in containers. In addition to the food, the Mozel Sanders Foundation gave out scholarships during a program at Butler University Thursday morning.

Funding the annual dinner takes time. If you would like to help with this year’s efforts, go to the group’s website here or text “MOZEL” to 313131. You can also send a check payable to the Mozel Sanders Foundation to 709 N. Belmont Ave, Indianapolis, In 46222.