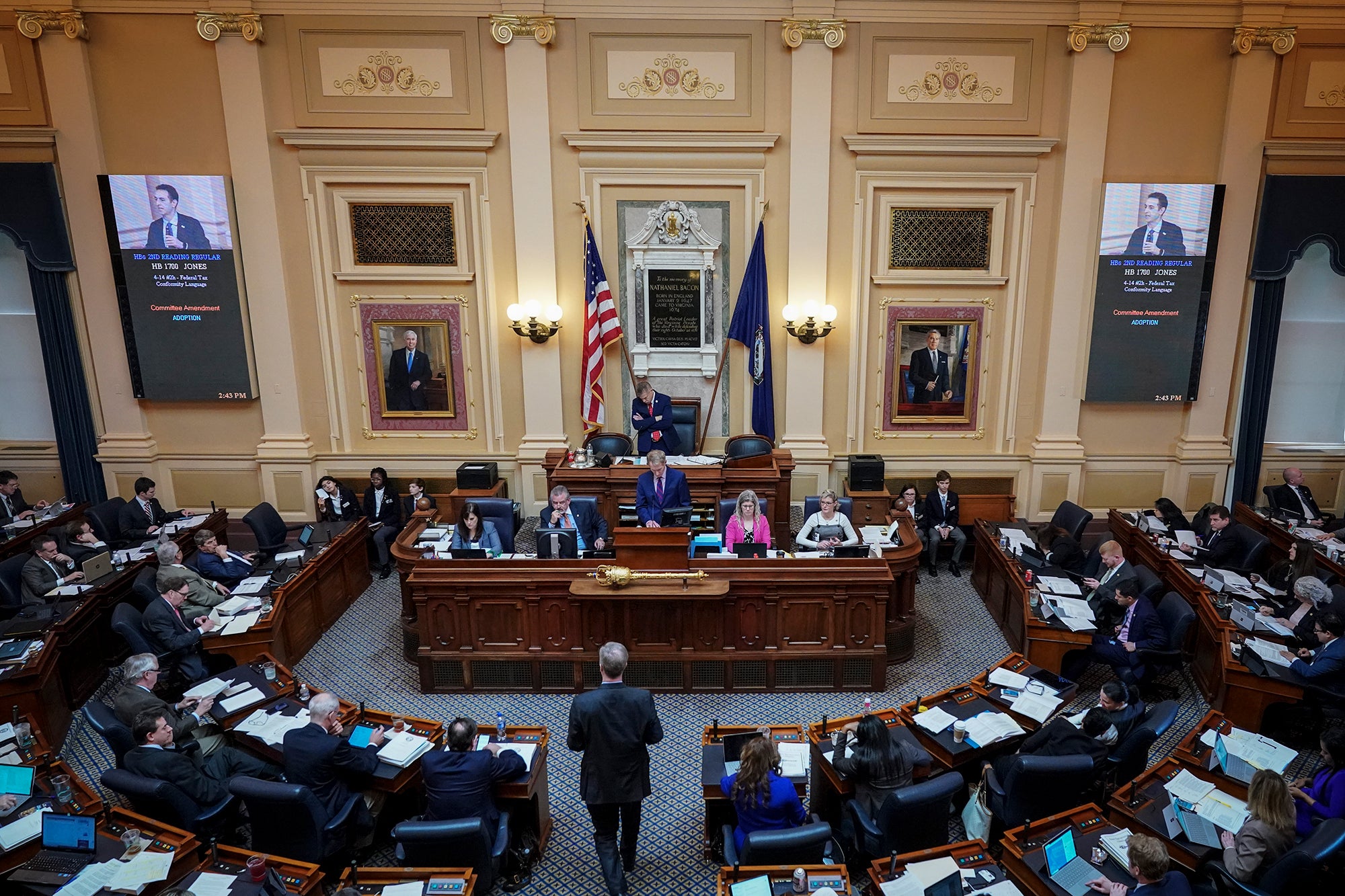 RICHMOND, VA - FEBRUARY 07: A view inside the House of Delegates chamber as Virginia Speaker of the House Kirk Cox presides over a session at the Virginia State Capitol, February 7, 2019 in Richmond, Virginia. Virginia state politics are in a state of upheaval, with Governor Ralph Northam and State Attorney General Mark Herring both admitting to past uses of blackface and Lt. Governor Justin Fairfax accused of sexual misconduct. (Photo by Drew Angerer/Getty Images)
by: Kelly Mena, CNN
Posted: Feb 9, 2020 / 01:43 PM EST / Updated: Feb 9, 2020 / 04:05 PM EST

(CNN) — It’s been 160 years since West Virginia seceded from Virginia. Now, some West Virginia Republicans are encouraging conservative counties that stayed behind to leave.

Two bills are currently advancing in the West Virginia state legislature to bring in new counties. One measure looks to bring in Frederick County, in northwestern Virginia, using language dating back to the time of the state split, and another broadens the invitation to all counties in the state.

Republican state Del. Gary Howell, who backs the broader bill, described his bill in an interview with CNN as the way to “prevent civil war,” arguing that people have the right to “live the way they want.”

The Frederick County Board of Supervisors did not immediately respond to emails from CNN.

The idea got its most public boost in January, when West Virginia Gov. Jim Justice and Liberty University President Jerry Falwell, Jr. reminded Virginians that, under West Virginia law dating back to the creation of the state, “additional territory may be admitted into and become part of [West Virginia] state with the consent of the [Virginia] legislature.”

Both men are Republicans with strong ties to President Donald Trump. Justice in April 2017 announced his plan to switch parties from Democrat to Republican at a rally with Trump, while Falwell has emerged as one of Trump’s most loyal evangelical supporters.

West Virginia went heavily Republican in the 2016 presidential election. Trump won with an overwhelming 68.6% of the vote over Hillary Clinton’s 26.5%. Virginia, skewed Democratic, with Clinton getting 50.2% of the vote while Trump got 44.8%.

Since taking control of the state government in January, Democrats in Virginia have been passing a slew of gun control measures including a ban on assault rifles and “red flag law” bills.

The Democratic moves have led to a backlash from conservative and pro-gun rights groups in the state including the Virginia Citizens Defense League. The VCDL led an effort to pass symbolic resolutions declaring counties “Second Amendment sanctuaries” in support of gun rights for “law abiding” citizens.

Virginia Gov. Ralph Northam’s office is dismissing the secession effort as a political stunt aimed at raising Justice’s profile in a reelection year. Justice is up for reelection in 2020 and is facing challenges from both Republicans and Democrats.

“Sounds like it’s an election year in West Virginia,” said Alena Yarmosky, a spokeswoman for Northam.

How could it work?

Virginia officials have thrown cold water on the proposals, saying it’s not logistically clear how secession would be achieved.

“I know this issue has had a lot of discussion recently, but there is no established method or procedure for counties to secede from the Commonwealth,” Jeff Sharp, a senior attorney with the Virginia General Assembly, said in an email to CNN.

Falwell, whose Liberty University is located in Lynchburg, Virginia — several counties away from the West Virginia border — said in January that the first step would be petition drives to collect a certain amount of signatures.

These signatures would then have to be presented and approved by the county Board of Supervisors to then get onto the county ballot as a referendum, Falwell said. If the referendum is successful, it would ultimately have to be approved by the Virginia General Assembly, according to Falwell, who said hehas been in consultation with lawyers over the process.

Falwell at the same time noted that the idea would be a “long shot.”

“Even if it doesn’t completely succeed it would send a clear message: of what a great job Gov. Justice is doing here in West Virginia by how many people would like to go even if they aren’t allowed to go,” he said.

Virginia lawmakers have joined Northam in dismissing the idea.

Similarly,Sen. Emmett Hanger, a Republican from the border county of Augusta, told the paper: “What are they doing, a comedy routine?”

Cynthia Nicoletti,professor of history at the University of Virginia School of Law, said that the longstanding invitation that West Virginia has to bring in Virginia counties only applies to bordering counties and even then the invitation is no longer valid.