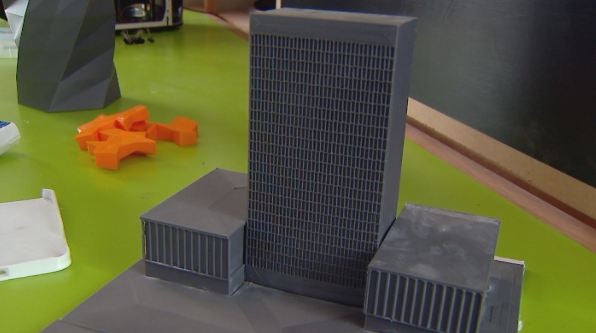 The Design Bank, located in the 3600 block of East 38th Street, hosted the event.

Wil Marquez is one of the founders. He gave 24-Hour News 8 a tour of the facilities that are housed inside the 1950s bank with a large safe inside. The Design Bank has been called an urban community engagement project and entrepreneurial exchange of creative ideas.

Inside the building is a 3D printer that is used to create ideas and manufacture ideas through a computer. The goal is to offer classes for teenagers and adults.

“We hope to produce a millionaire out of a great idea,” said Marquez. “Maybe someone that is 15-year-old will go on Shark Tank and they would have gotten their start here at the Design Bank. “

During a brief tour, Marquez explained why he believed the Design Bank could help reduce crime and improve the quality of life to residents near 38th and Sherman.

“Designers look at things through a different lens,” said Marquez.

According to DPS, between January 2013 and August 2014, there were 15 homicides in the East 38th Street and Sherman Drive areas. Those stats also included 32 non-fatal shootings and 39 drug overdoses.

“It is identified as a hot-spot, but we see it as not a challenge but as an opportunity for design to come in and make big changes,” said Marquez.

The hope is that through creativity and ideas, residents will share their thoughts and creativity and then benefit from something they’ve manufactured.

Residents were invited to Tuesday’s conversation.