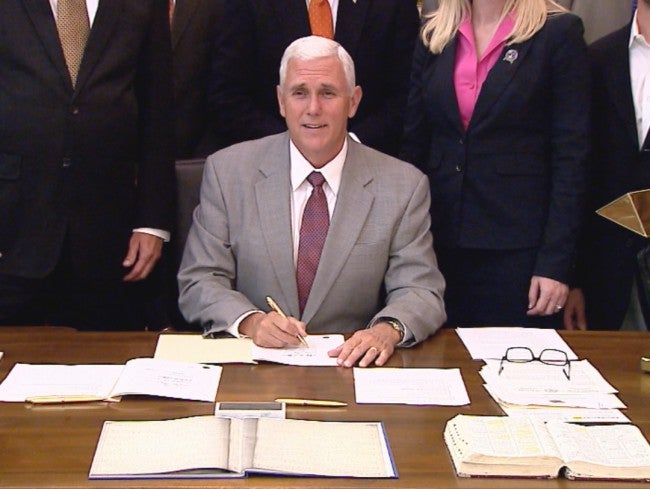 INDIANAPOLIS (WISH) — Governor Mike Pence suggested Wednesday that the RFRA crisis is over.

He made the case by pointing to recent good news about the Indiana economy.

Pence is still trying to make a political recovery from the crisis that dropped his approval rating by about 20 points. To do so, he wants the public to believe that his leadership is responsible for an economic recovery.

That’s why he kicked off a ceremonial bill signing by holding up a newspaper headline about the state’s unemployment rate.

It’s below 5 percent for the first time since 2008, despite threats from around the country to take business out of Indiana during Religious Freedom controversy in March and April.

The governor believes the RFRA fix, which created limited equal rights protections, is a reason for the improvement.

He was asked if there is still a need to do more in terms of protections statewide for gays and lesbians and answered by saying, “I think our economy speaks for itself. Our economy is strong and growing stronger.”

He later said, “We’ll leave debates about the future for the future.”

He was then asked if RFRA is just an economic issue.

“I really do believe that we found a way through that difficult period last spring to calm the waters,” he said. “And the facts speak for themselves.”

A spokeswoman for the governor followed up later saying that the governor is studying the issue of equal rights.

She said, “He is listening to Hoosiers and has an open mind.”

A spokeswoman for Freedom Indiana said that economic improvements are important but making sure that Indiana is open to everyone is critical.