Propane shortage not a concern this winter 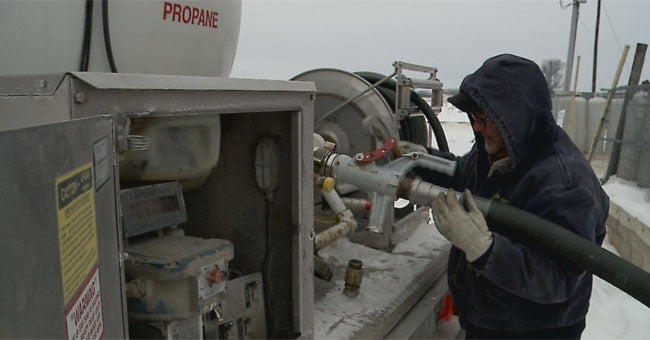 COLFAX, Ind. (WISH) – People who use propane to heat their homes might not have the same problems they had last winter.

A propane shortage hit the Midwest last January, forcing everyone from homeowners to farmers to go into conservation mode.

But one company we talked with is confident this season will be different.

It’s business as usual Thursday for Charlie Hutchins. The Sagamore Gas owner is reloading the truck with propane, ready to make another round of deliveries to his customers.

At the moment, their main storage tank is more 80 percent full.

“The supply of gas makes us feel good,” he said.

Especially when you consider about a year ago, it was barely above 10 percent.

His company is used to delivering 20,000-25,000 gallons of propane a day. But the shortage cut that amount to 9,500 gallons, and propane users were feeling the pinch.

Livestock farmers were getting anxious as well, so much that Governor Mike Pence was asking crop farmers to donate leftover propane to them to keep animals warm.

But even though Old Man Winter has returned, Hutchins said the problems that caused the shortage have not.

One issue was pipeline breakdowns.

“I just heard of the first (breakdown) out in Iowa in the last few days and it’s been corrected already,” he said.

On top of that, a wet harvest in 2013 forced farmers to use propane to dry grain soaking up much of the supply. But that wasn’t the case last fall.

“Mother Nature worked for the farmer and let the corn dry in the fields so that was a huge impact last year and it was a minimal impact this year,” he added.

It’s welcomed relief that takes away some of pain of working in the cold.

“Now we can just do business as usual as opposed to have to worry about rationing gas,” Hutchins said.

He added that his customers also prepared for another shortage. He said several of them filled up their tanks to full over the summer. They also pre-bought propane at a fixed rate in case the price might spike like it did last January.