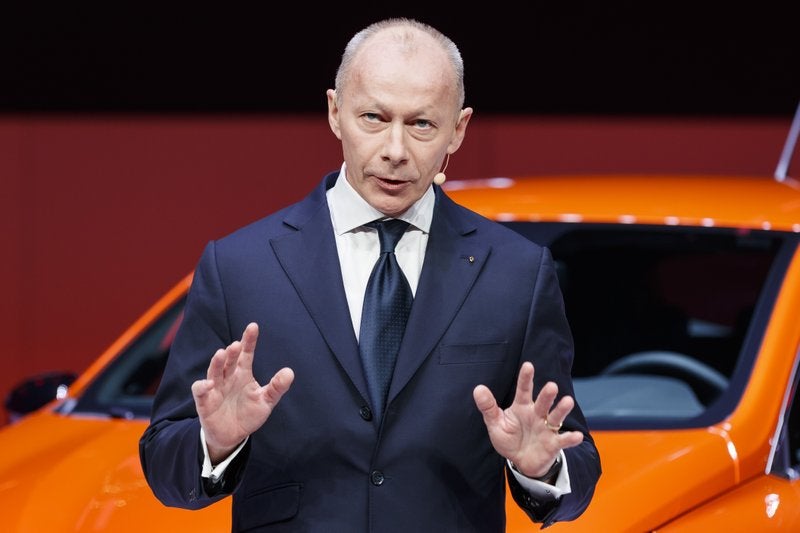 FILE - In this Tuesday, March 5, 2019 file photo, Thierry Bollore, Renault Chief Executive Officer, speaks during the presentation of the new Renault Clio as part of the press day at the '89th Geneva International Motor Show' in Geneva, Switzerland. French carmaker Renault has dismissed its chief executive officer, overhauling its leadership once again after the jailing of its previous chairman and CEO. The decision by the board on Friday Oct. 11, 2019, to dismiss Thierry Bollore was effective immediately. (Cyril Zingaro/Keystone via AP, File)
by:
Posted: Oct 11, 2019 / 06:38 AM EST / Updated: Oct 11, 2019 / 06:38 AM EST

PARIS (AP) — French carmaker Renault dismissed its chief executive officer on Friday, overhauling its leadership once again after the jailing of its previous chairman and CEO.

It came days after Nissan, with which Renault shares a deep alliance, named a new CEO, indicating the two companies were intent on cleaning house after a scandal over former chief Carlos Ghosn rattled their upper ranks.

The decision by the board to dismiss Thierry Bolloré was effective immediately.

Bolloré replaced Ghosn after the former CEO was jailed in Tokyo in last November on charges of falsifying financial reports in under-reporting compensation and breach of trust. Ghosn, who led the Nissan-Renault alliance, is currently awaiting trial and denies wrongdoing.

The company said Bolloré will be replaced on an interim basis by current Chief Financial Officer Clotilde Delbos.

Chairman Jean-Dominique Senard will become president during the interim period.

Renault owns 43% of Nissan but their alliance came under strain after Ghosn’s jailing. Renault considered a merger offer from Fiat Chrysler Automobiles that would have created the world’s third-largest automaker, but the talks fell apart due to concern over Nissan’s role.