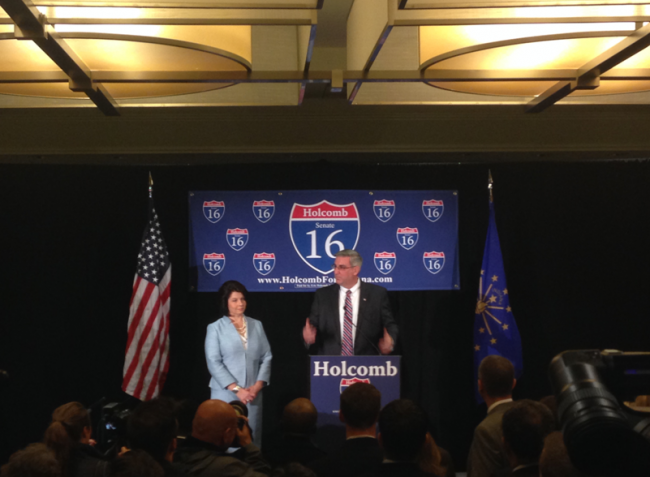 Coats announced earlier this week he would not seek reelection. Holcomb stepped down from a job running Coats’ state office shortly after learning of the Senator’s decision. Holcomb is the first official candidate to throw his hat in the ring.

Holcomb said he wants to lead the same “proven, passionate solutions oriented approach” in Washington as seen in the last decade in Indiana.

“Ten some years ago our state was running adrift,” Holcomb said. “That all changed when Hoosiers in record numbers came together and rallied around a leader surrounded by other leaders who presented solution oriented ideas always leaning toward more freedom, greater opportunity and bold pro-growth policies.”

Holcomb said he was proud to have been a part of that turnaround and that the experience taught him that broad public support and engagement is “paramount to realizing real change for the better.”

“And, I’m asking every Hoosier who feels the way I do – who has a shared responsibility and duty – who feels that returning America to our rightful and respected position in the world to join me.”

Holcomb said his campaign will focus on five key goals:

This campaign will seek to attract people of diverse backgrounds and perspectives and experiences – we will welcome and engage them,” Holcomb said. “This campaign, in short will be about Indiana’s voice.”

Holcomb was joined on stage by his wife, Janet, who helps run a family owned business in Madison County. She believes it’s right time for her husband to run for office.

“I think Eric has a lot to add in D.C. He brings tremendous qualifications with his background with Mitch Daniels, with Senator Coats and other experience he’s had in politics,” she said. “He’s a fantastic guy, a great leader and I think he’ll do a tremendous job for our state.”

“I’ve been around very successful folks who have held office and I’ve helped them all along the way,” he said. “So I’ve learned a ton over the years and I want to take what I’ve learned and lead it in Washington, D.C.”