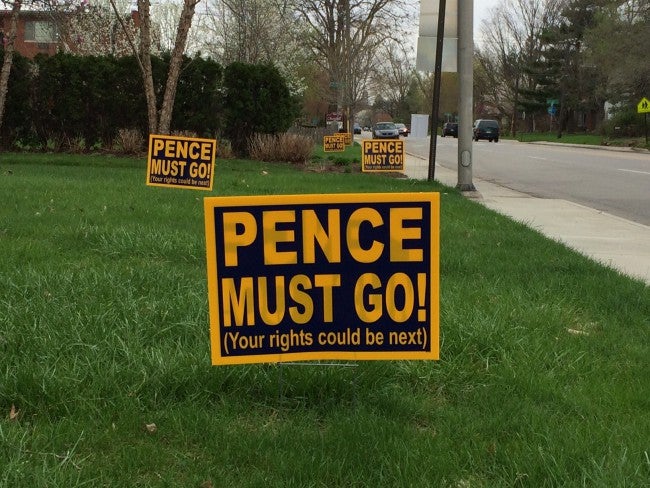 INDIANAPOLIS (WISH) — Governor Pence wants to put the religious freedom fallout behind him.

“I really do believe that we are through the storm that now is the time to heal,” said Gov. Mike Pence.

But some aren’t ready to let it go just yet.

“When he signed that bill, basically discriminating against the LGBT community, it made me angry,” said Kevin Warren, who is selling signs that say Pence Must Go. “This gave me an opportunity to fight back. I’ve sold about 400 to 500 so far.”

Warren was also behind the Reject HJR 6 and three signs from last year when the state was looking to ban same sex marriage.

Warren lives at on 3544 Central Avenue in Indianapolis and the signs are on his front porch. Those who want a sign are asked to write a check for $10, put the check in the mail slot. The money goes to Lamda Legal.  Lamda Legal calls itself the country’s largest legal organization focusing on LGBT rights.

“They’re going up as we speak ,” said Warren

But others are using the signs for a different reason.

“It was brought to my attention because he took away my vote,” said Martha Baker-Blue who put the sign in her yard as the legislature moves to remove powers from State School Superintendent Glenda Ritz. “Writing letters and calling is good, but we need to show something that we’re upset about it.”

Tuesday the governor boiled the argument down to politics.

“I’m going to stay focused on the future of this state and we’ll leave discussions about politics for down the road,” said Governor Pence.

Warren says he’s been an activist for 30 years and says this latest movement shows the fight continues.

“You’ve got to get involved, it seems we’ve been frustrated for so many years, but you can’t give up,” said Warren.