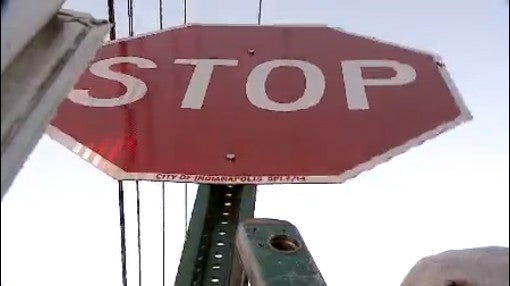 INDIANAPOLIS (WISH) — Just days after a tragic accident killed a first-grader, the city has taken action to make one Indianapolis school zone a safer place.

The school says the city’s quick action has brought positive change to a negative situation.

Three stop signs stand tall and the fresh crosswalk gleams on 91st Street in front of Nora Elementary. Construction crews hit the pavement early this morning to make the installations, which will help students cross the busy north-side road.

“I think it’s a great idea, I really do,” said Kenneth Crowther, who walks his niece to school every day. “I wish they would also do that at more intersections at schools like this.”

They’re too late to save Dar Wee, the six-year-old student who was struck by a car on his way to tutoring one week ago.

But the school says they must move forward from the accident.

“It did take this. And I am still saddened and will be saddened by the loss of our dear student. It was one of the hardest things I’ve ever gone through,” said Amber Walters, principal of Nora Elementary. “However, in memory of him, I know he is honored by the efforts that have gone through to make this happen so quickly.”

To avoid a lengthy approval process, the Department of Public Works issued an emergency order allowing them to get the signs and crosswalks installed immediately.

“Our goal was providing a solution here to enhance the safety for pedestrians is really about preventing an accident like this from occurring in the future,” said Scott Manning, a spokesman for DPW.

The school is adding education to the infrastructure.

“We’ve talked to all the kids that come to the tutoring program and making sure they know exactly where to cross, and that they don’t cross without an adult with them,” said Walters.

And parents, too, hope the signs can stop tragedy from striking again.

“As parents in a community, we’re really grateful for the immediate response and this first step to improving safety,” said Rebecca Austin, mother of a Nora third-grader.

The DPW said they will now go through the formal approval process to make sure the stop signs and crosswalks are permanent installations.

If you would like to help Dar Wee’s family with the funeral expenses, Nora Elementary School is accepting donations on their behalf.