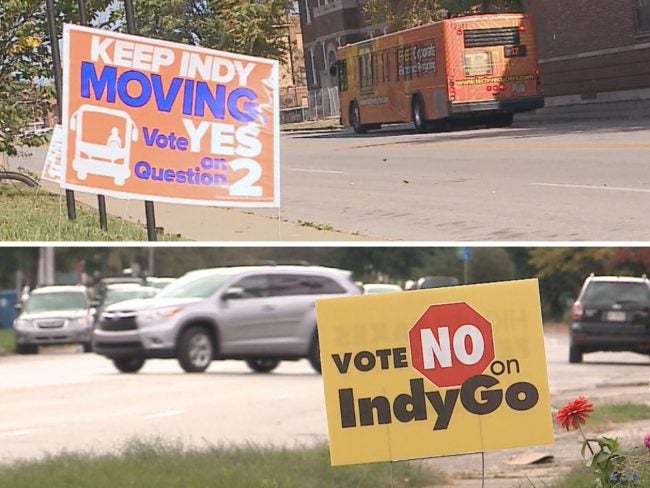 INDIANAPOLIS (WISH) – One of the hottest debates on the November ballot is proving not to be the presidential or the governor’s race, especially for those who live in Marion County

It appears to be Public Question Number 2, which involves funding for mass transit.

The question is simple: do you want to pay 0.25% more in income taxes to expand bus lines in Marion County?

“I think we need more bus lines because a lot of people can’t get back and forth, especially to work,” said David Bass, as he was boarding a bus on East Washington Street.

“It should be voted down and that way they (Indy Go) can go back to the drawing board,” said Karen Neiswinger, who is opposed to the referendum.

If voters approve it, bus transit throughout the city will increase by 70 percent over the next five years.

“This 0.25 percent income tax would fund the build out of a much more robust system than we have today,” said Bryan Luellen, the spokesman for Indy Go.

The referendum would pave the way to create three new rapid transit lines. Two would travel east and west and one north and south.

“What we’re talking about here is making all of those bus lines more reliable, more frequent, more predictable, 7 days a week, earlier in the morning, and later at night,” said Luellen

“The priority should always be those who most need transportation,” said Neiswinger.

Neiswinger has lived on College Ave for 37 years. Much of her opposition is to the Red Line. It’ll have buses running on dedicated lanes. Phase 1 will go from Broad Ripple down to the University of Indianapolis.

It will run right in front of her house in the Meridian Kessler neighborhood.

“We believe that money could be and should be better spent concentrating on the area of the city where the need is the greatest and that is on Washington Street,  east and west and also on 38th Street,” said Neiswinger.

The Red Line will be built with a $75 million federal grant, with construction starting next year.

But the maintenance for the line will be paid for with dedicated funding granted by the referendum.

For those who use the service each and every day, it’s about improving their livelihood.

“We need better transportation for people who need to get to work, to the grocery store to the laundry mat,” said Mark Smith, while boarding a bus at the Transit Center.

Indy Go is hosting a public question and answer period on this referendum.