Surge in heroin use straining the law enforcement system 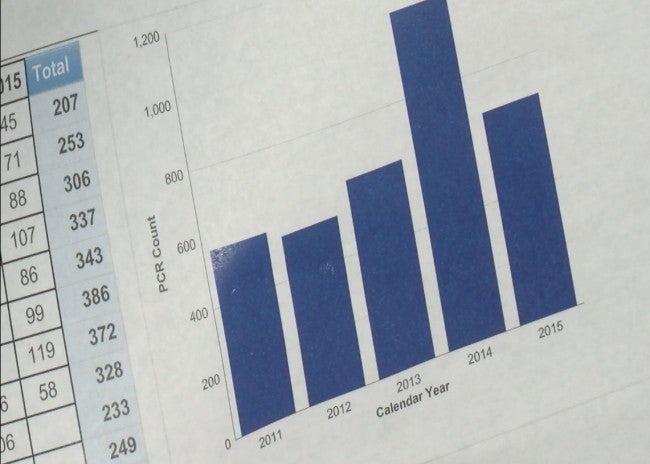 INDIANAPOLIS (WISH) — Heroin use in Indianapolis is on the rise and one of the most stand-out effects is the impact on law enforcement.

Officers are responding to more overdose calls. Police are also actively working to stop this epidemic, starting with the youngest potential users.Edit

First responders gave him a dose of Narcan, a drug which immediately reverses the effects of heroin. Crews then took him to the hospital.

Emergency responders track heroin overdoses by uses of Narcan. In 2014 the numbers surged over the prior three years, with 1,063 cases. Carl Rochelle with Indianapolis EMS said with 747 cases through August 2015, the numbers are on pace with last year.

Those numbers are no surprise to Indianapolis Metropolitan Police Department Detective David Spurgeon who said the heroin cases are putting strain on the system.

“I was working primarily burglaries, thefts, and assaults and what we saw is a rise in our property crimes and we were attributing that to heroin use,” he said.

And Rochelle said police are required to respond to overdose calls because illegal drugs are involved.

But the men are trying whatever it takes to curb the trend in the coming years.

“This is not a situation we can just arrest our way out of,” Spurgeon said. “You have to take a multi-phase approach.”

One of those phases takes place at Lynhurst School where police have been visiting since 2013, giving kids what could be a life saving presentation.

“A presentation on opiate awareness and how someone that may be addicted to opiate prescription drugs translates into heroin use,” Spurgeon said.

Teacher William Haverly said the anti-drug messages are relevant for his students and that this is the right age to start addressing the problem.

“We have a lot of kids that are surprised about it, but we have kids that have first-hand knowledge about the heroin epidemic on the southwest side,” he said.

He hopes that the police continue traveling to classrooms like his across Indianapolis as long as the kids continue to be exposed to drugs in their lives.

“I think the presentations do a very good job at helping kids to avoid the heroin, the opiates,” Haverly said.

He wants to ensure that none of his students ever end up on the wrong end of an overdose call.

That involves cooperation from IMPD, Eskenazi Health, the Department of Education, and non-profit organizations to connect heroin users to resources for treatment.