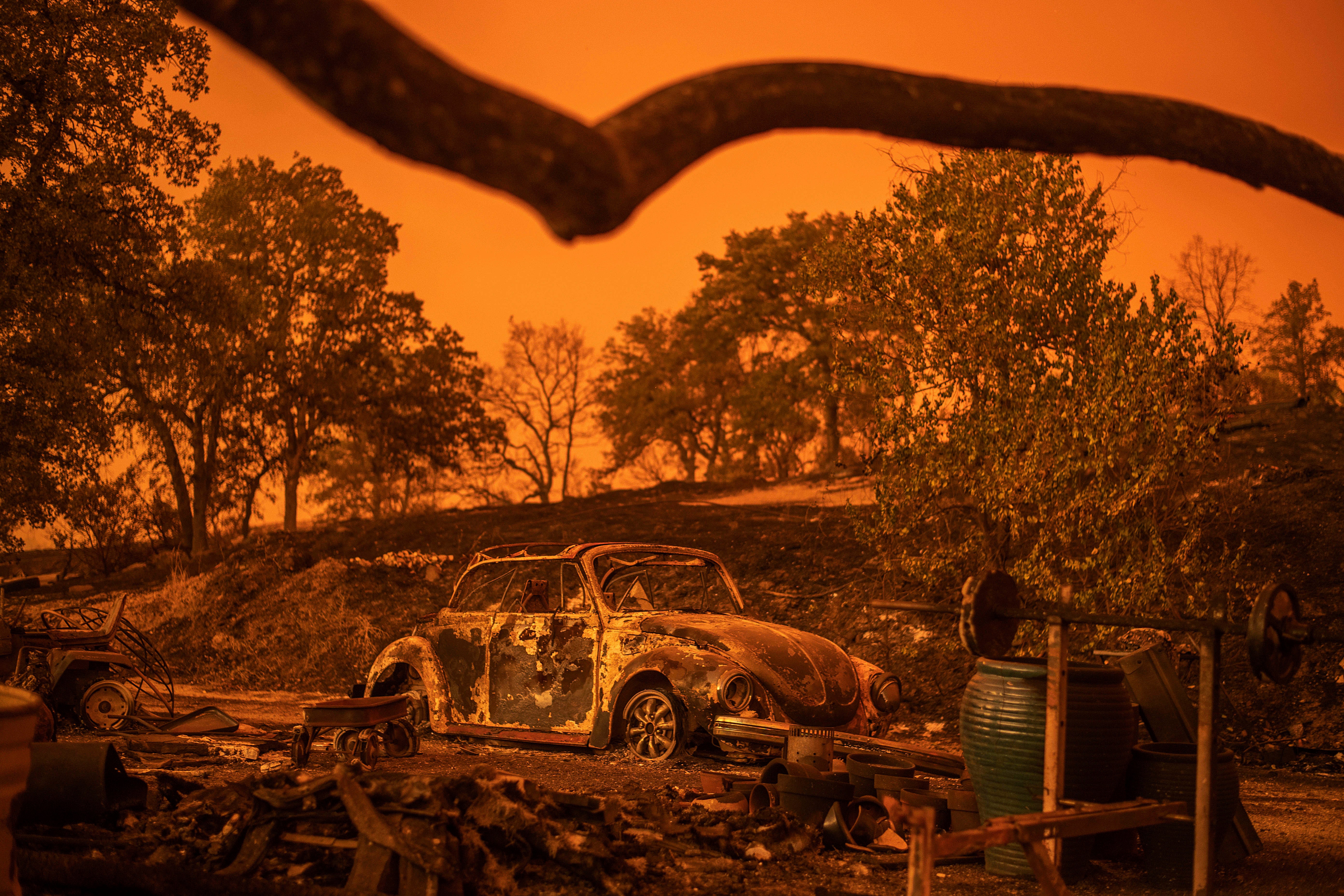 REDDING, Calif. (AP) — A wildfire that roared with little warning into a Northern California city claimed two lives as thousands of people scrambled to escape before the walls of flames descended from forested hills onto their neighborhoods, officials said Friday.

Residents who gathered their belongings in haste described a chaotic and congested getaway as the embers blew up to a mile ahead of flames and the fire leaped across the wide Sacramento River and torched subdivisions in Redding, a city of 92,000 about 100 miles south of the Oregon border.

“I’ve never experienced something so terrifying in my life,” said Liz Williams, who loaded up two kids in her car and then found herself locked in bumper-to-bumper traffic with neighbors trying to retreat from Lake Redding Estates. She eventually jumped the curb onto the sidewalk and “booked it.”

“I didn’t know if the fire was just going to jump out behind a bush and grab me and suck me in,” Williams said. “I wanted out of here.”

The blaze leveled at least 125 homes, leaving neighborhoods smoldering and 37,000 people under evacuation orders. Redding police chief Roger Moore was among those who lost their homes, the Los Angeles Times reports.

The flames moved so fast that firefighters working in oven-like temperatures and bone-dry conditions had to drop efforts to battle the blaze at one point to help people escape.

The fire, which created at least two flaming tornados that toppled trees, shook firefighting equipment and busted truck windows, took “down everything in its path,” said Scott McLean, a spokesman for Cal Fire, the state agency responsible for fighting wildfires.

Fire officials warned that the blaze would probably burn deeper into urban areas before there was any hope of containing it, though it either changed direction or was stopped before it could burn into the core of the city.

The fire was likely to regain strength later in the day when temperatures were forecast to spike around 110 degrees (43 Celsius) and winds were expected to kick up.

Redding sits at the northern end of the agricultural Central Valley, surrounded by a scenic landscape. Rivers channel abundant winter rainfall into massive reservoirs used for boating and fishing. The area’s stunning mountains, including snow-capped Mount Shasta, topping 14,000 feet (4,265 meters), are a playground for outdoor enthusiasts.

Lightning and even a lawn mower have sparked devastating fires in the forests that ring the peaks and lakes. The blaze that broke out Monday was caused by a mechanical issue involving a vehicle, officials said.

The fire rapidly expanded Thursday when erratic flames swept through the historic Gold Rush town of Shasta and nearby Keswick, then cast the Sacramento River in an orange glow as they jumped the banks into Redding.

Steve Hobson, a former firefighter, said flames on the distant hillside looked like solar flares on the sun.

He had planned to stay behind to save his house on Lake Redding Drive. But the heat burned his skin, and smoke made it hard to breathe. He could feel the fire sucking the air from around him, whipping up swirling embers in a “fire tornado,” he said.

He had to drive through walls of flaming embers on both sides of the street when he finally fled. A tree fell right in front of him.

When he returned Friday, his fence had burned along with a backyard shed and everything inside it — Christmas ornaments, china and old televisions. But his house made it through the harrowing night.

Others homes in the haphazard path of destruction were not so lucky. Where some houses stood unscathed, single walls or chimneys were all that remained of others. Burned-out skeletons of pickup trucks and VW beetles sat on tireless rims in the ash.

An Associated Press survey found 66 homes destroyed in Hobson’s neighborhood and another 60 gone in Keswick Lake Estates. About 5,000 other buildings were threatened, fire officials said.

Redding fire inspector Jeremy Stoke was killed in the blaze, though no details were offered on what happened to him. Another firefighter hired to try to contain the flames with a bulldozer was killed Thursday, authorities said.

Fire crews in Redding for a time abandoned any hope of containing the flames and instead focused on saving lives.

“We’re not fighting a fire,” said Jonathan Cox, battalion chief with Cal Fire. “We’re trying to move people out of the path of it because it is now deadly, and it is now moving at speeds and in ways we have not seen before in this area.”

Elsewhere in the state, large fires continued to burn outside Yosemite National Park and in the San Jacinto Mountains east of Los Angeles near Palm Springs.