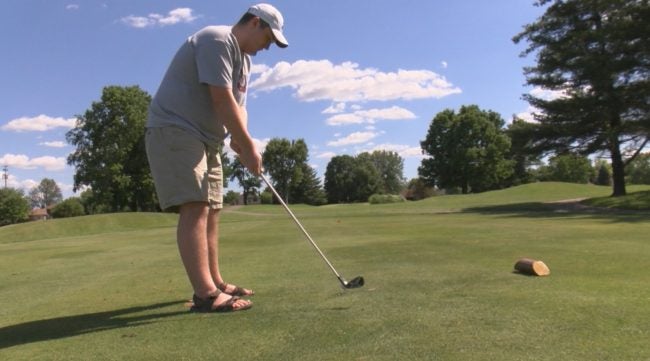 INDIANAPOLIS (WISH) — The University of Indianapolis men’s golf team is not only focusing on their game, but also building a relationship with a new member of their team. The golfers recently partnered with Team IMPACT, an organization that pairs collegiate teams with children facing life-threatening and chronic illnesses.

UIndy has been a strong partner to Team IMPACT. Both the soccer and baseball teams have drafted a Team IMPACT child, but very few golf teams have ever taken part.

When the UIndy golf team decided to take a swing at it, they never realized it would impact their team so much. For 16-year-old Andrew Rusk of Brownsburg, being a part of a collegiate sports team is almost as unlikely as a hole-in-one.

“My doctors have told me I have the lungs of an 87 year old,” Andrew Rusk said sitting in a golf cart at Dyes Walk Country Club.

Today he’s out on the course with his UIndy golf teammates, trying out his golf swing for the first time on a full course.

“A lot better than the first time I hit a golf ball, that’s for sure,” golfer Reid Lorey said.

Andrew looks like any other teen, but he has mitochondrial myopathy, a muscle disease that often leaves him hooked up to medical devices at home and taking medication several times a day. Doctors have even told Andrew more than once that he only has weeks to live.

“We’ve learned so much through this and more importantly we’ve learned not to take anything for granted, not take our health for granted. We play golf and I play golf and we have fun and we travel all over the United States doing something that Andrew can’t do, but he’s taught us how to live life and be fun and outgoing and love every minute and that’s been something that I can’t teach to our kids that Andrew has,” Coach Brent Nicoson said.

Nicoson pushes Andrew like any other kid on the team. Afterall, he did have him sign a letter of intent in December and offer him an official spot, but Nicoson says Andrew has far exceeded his expectations and so has his team as they’ve welcomed Andrew and his family.

“It’s not a fake thing. We don’t have to make ourselves do that. We love helping people and he seems to really enjoy having our kids around, but the guys do it all on their own,” Nicoson said.

“It’s really helped him develop socially, but also it’s been great because he has these guys that will text him and encourage him and sometimes those words come right at the perfect moment right when you need them,” Karen Rusk, Andrew’s mother, said.

And for a kid who didn’t think sports were a possibility, he’s having a ball on the golf course with his very own team.

“I’m just so glad to see what it’s like to do golf and experience things that I haven’t been able to before,” Andrew said.

“He’s surprising all of us and I need to watch out next year, my spot could be on the line,” golfer Christopher Heck said.

Coach Nicoson said Andrew will have a spot on the UIndy golf team for as long as he likes. If you have a child who may benefit from Team IMPACT or a college team who might like to be paired with a child, click here.