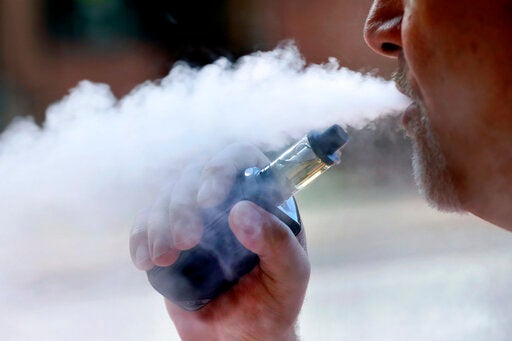 LAFAYETTE, Ind. (WLFI) — A vaping-related death has been reported in Tippecanoe County, according to a spokesperson from IU Health Arnett Hospital. Officials did not release any specifics about the person who died.

This is the third death reported from vaping in Indiana.

This comes a little over a month after the state reported its first vaping death. State health officials said the victim was over 18-years-old, but didn’t reveal any other details.

The health department listed at least 75 confirmed or probable cases of lung illnesses that are tied to vaping in Indiana.

The number since doubled with the last month. The majority of cases include people between 16 and 29-years-old.

There have been at least 26 vaping deaths and nearly 1,300 lung injury cases nationally, according to the Centers For Disease Control Prevention Center (CDC).

Authorities still don’t know what exactly is causing the illnesses, but have said most of the victims reported vaping products with THC, the active ingredient in marijuana.

“These oils or THC, when you inhale them into your lungs they cause an intense inflammatory reaction. The body is doing what it’s designed to do and that’s to combat a foreign body, something that shouldn’t be in there,” Dr. Graham-Carlos said. “All this inflammation is blocking oxygen from getting from the air and into your blood stream where you need it and that’s causing people to go into respiratory failure, ending up on ventilators and in some horrible cases, end up dying.”

Several states and the federal government have announced plans to ban the sale of flavored e-cigarettes, but so far Indiana has not announced such a plan.

There is an active vaping related illness case in every state except Alaska, according to the CDC.