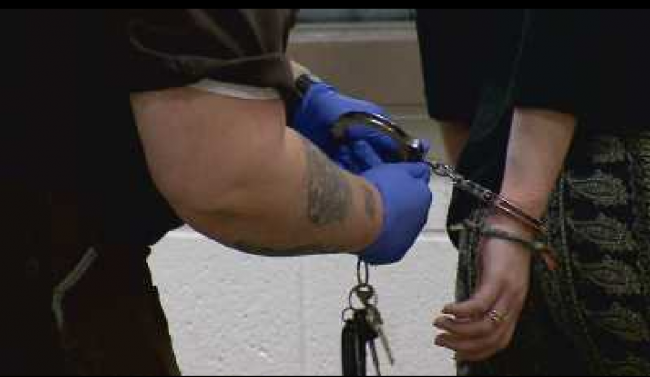 But on an early October night, the staff counted 300 inmates in the jail.

The inmates smacked their hands against the walls and shouted when they saw a news crew walk by.

Two guards look over nearly half of those inmates on the third floor. Jail Officer Hector Archoa says there are days when he’s the only guard on a floor.

“It’s stressful,” Archoa said. “I mean, when you’ve got a guy doing something over here, you got your back turned to this side. So you really don’t know what’s going on.”

The staff had already separated two inmates because of a fight before the news team arrived.

The jail’s security video shows another fight, earlier this year, when one inmate shoved another off a balcony.

Sheriff Scott Mellinger says the more packed the jail, the rowdier the inmates.

“It would be great if people would just straighten up and not commit the crimes,” Mellinger said. “But the most frustrating thing to me is that the general public and some elected officials are not taking this seriously enough.”

About 40 sheriffs across Indiana reported over-capacity jails in a 2017 survey from the Indiana Sheriff’s Association.

Mellinger said the jam-packed jails are causing not only safety concerns for the staff and inmates, but financial concerns for jails working with tight budgets.

Mellinger said one reason for overcrowding in his jail is the fact that more than 40 of the inmates can’t afford a $500 dollar bond. But that’s not the biggest factor.

“I would say the most prevalent issue is drug abuse,” he said.

More than 80 percent of the Madison County inmates committed some kind of drug-related crime, according to Mellinger.

20-year-old Shawn Arnold, a recovering methamphetamine addict, spent seven months in the jail last year. He was locked up after breaking into two Madison County businesses while high on meth.

“Just to get money so I could keep getting high,” Arnold said.

“Going to treatment, in AA meetings every day, taking drug screenings frequently. They just hold you accountable for everything you do,” Arnold said. “It’s the best thing that’s ever happened to me.”

Mellinger is hoping more inmates will commit to treatment.

He says tensions run high when three inmates are forced to share a cell and some sleep on makeshift beds on the floor.

The guards in Madison County scour the cells just before midnight. They find extra towels and uniforms hidden every night.

Detectives said in 2015, an inmate knocked a hole in the jail wall and roped together ripped blankets and a uniform to smuggle in synthetic marijuana. Three inmates faced charges after a K-9 sniffed out the drugs.

“A whole lot of crisis management when you don’t have the resources you need and then when you’re overpopulated,” Mellinger said.

The inmates raised their voices again as the jail officers moved through their cells before midnight. One inmate extended his middle finger to the news camera.

The staff says it’s not unusual for the inmates to disrespect them. The guards have the option to write an inmate up.

“It would make them go on lockdown for 24 hours,” Archoa said. “But if I would sit here and write every inmate up that would cuss at me and flip me off, I’d be writing reports all night.”

The state has also launched a program called RecoveryWorks, which helps connect offenders with treatment if they don’t have insurance. It’s part of House Bill 1006, a criminal justice reform bill introduced last year.

Sheriffs across the state say HB 1006 is contributing to overcrowding. The bill requires county jails to house low-level felons that used to be in state custody — about 10 percent of all county inmates, according to the Indiana Sheriffs Associations’ survey.

The Indiana Department of Corrections declined a request from 24-Hour News 8 for an interview for this story.