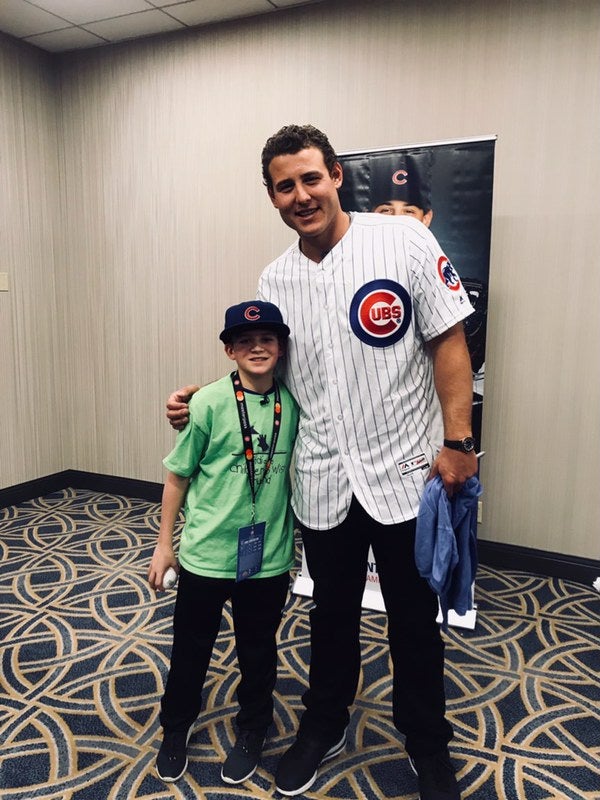 INDIANAPOLIS (WISH) — In the game of baseball, innings are chapters. Some are good and others are bad. How you respond to both determines the outcome.

Life has thrown Ryan Keating, 13, some curveballs but through it all he is still determined to win.

The Indianapolis sixth grader has spent his life collecting everything Chicago Cubs. The one thing missing: an autograph from his favorite player, Cubs first baseman Anthony Rizzo.

Ryan has admired Rizzo for years, due mostly to the battle Rizzo fought off the field.

It’s a battle Ryan knows all too well.

At the age of two, Ryan’s mother decided to have some blood work done on Ryan. When the results came back, she was asked to come in for a private meeting with the doctor.

“I didn’t think anything of it,” said Melissa Keating, Ryan’s mother. “I get up there and I call him back a little later and I said ‘I’m standing outside this elevator and this sign says Oncology.’”

Cancer was something that had never crossed the family’s mind.

“I can still remember the physician coming in and sitting down with us.” said Kiernan Keating, Ryan’s father. “I think right there and then you knew just by the reaction of that physician’s face that things were not going to be good.”

The diagnosis was Acute Lymphocytic Leukemia.

Ryan was admitted that day. After an immediate 30-day treatment, his two-year-old body started responding.

Doctors were hopeful, but the journey had just begun. For years, he underwent treatment, chemo and other drugs. The hospital became a second home.

“They had this special room that I’d always go to for my birthday or every month,” said Ryan. “They had prizes and I’d go get some prizes.”

The prize he really wanted was to meet Chicago Cubs star Anthony Rizzo, also a cancer survivor himself. In fact, that was what Ryan asked for from the Indiana Children’s Wish Fund when he learned he had been granted a wish. The Indiana Children’s Wish Fund works to surprise Indiana children between the ages of 3 and 18 who have been diagnosed with a life-threatening or terminal illness.

Turns out, it’s not easy to get a meeting with Anthony Rizzo. So the Indiana Children’s Wish Fund reached out to the WISH Patrol and together were able to make Ryan’s golden 13th birthday one to remember.

The WISH Patrol stopped by Ryan’s birthday party and delivered a signed letter and picture from Anthony Rizzo himself, and the Indiana Children’s Wish Fund delivered the news that Ryan and his family would meet Anthony at the Cubs Convention in January.

“It makes every single day worth it, you know, when you see how one little thing makes such a huge difference,” said Nancy Kapsalis with the Indiana Children’s Wish Fund.

The meeting with Anthony was made possible thanks to some very generous WISH Patrol supporters.

Republic Airline flew the family to Chicago and provided a VIP experience at the Indianapolis International Airport.

“It warms your heart, brings tears to your eyes as a father,” said Matt Koscal with Republic Airline. “It’s really neat to see the fruit of what we do. Helping children in Indianapolis is part of our core mission.”

Choose Chicago donated Chicago City Passes so the family could explore everything the city has to offer.

The Anthony Rizzo Family Foundation orchestrated a meeting with the man himself – a dream come true for Ryan.

“Knowing that he went through the same thing as me and knowing where he is now, that tells me something that I can do the same thing when I grow up,” said Ryan.

A rush of emotions for his parents, who could only pray their son would get to see this day.

“It was like all those moments where you sat there watching your child get chemo and wondering if your kids was going to make it or if this was going to be the turn for the worst and all those memories came back and it was like, you put them away for so long and then in that moment seeing him fulfill his dream that he’s wanted to do… it became real,” said Melissa Keating.

Ryan is now cancer-free. He enjoys playing basketball in school and continues to be a big supporter of the Chicago Cubs.

If you would like to help other kids wishes come true, you can donate to the Indiana Children’s Wish Fund.

The Anthony Rizzo Family Foundation raises money for cancer research and provides support for children and their families battling the disease.

Is there someone you think the WISH Patrol should pay a visit? Fill out this form and help us share their story.